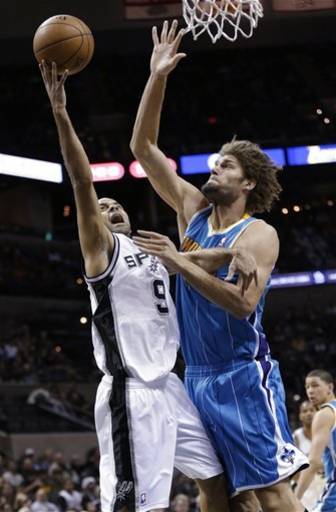 Back home in the comfy confines of the AT&T Center with a completely healthy roster, the San Antonio Spurs were able to get ahead of the New Orleans Hornets early and never look back.

While the Hornets made it close at times, especially in the fourth with an 8-0 run to bring it within four points, but Tony Parker's eight fourth quarter points were enough to keep the Hornets within arms reach, giving the Spurs their 20th win of the season. The Spurs stopped their two-game skid while the Hornets picked up their 10th consecutive loss.

In his 5 Things To Watch post yesterday, Jeff Garcia mentioned the Spurs' assists/FGM ratio, which was once again a factor last night.

The Spurs have the highest assists/FGM ratio in the NBA with a .642 ratio.

The Spurs put on a passing clinic last night, often using three or four passes before getting it into the hands of the scorer. They racked up 29 assists on a total of 39 field goals, good enough for a 74 percent assists/FGM ratio.

“Tony (Parker) has been doing that all season.  He is having a great year.  He really feels the responsibility down the stretch in games to get something done.  If we are a little bit flat or not making shots, that kind of thing, he has stepped up and been very confident in those situations.” – Spurs coach Gregg Popovich.

While Kawhi Leonard has likely been floating on the waiver wire since he was first injured last month, it might be a good idea to snatch him up in your leagues. In his first game back, Leonard finished with eight points, two rebounds, two steals and a blocked shot in 20 minutes. He'll likely be seeing a steady rise in minutes as Pop brings him back slowly.

Nando De Colo was serving up the highlights again last night as he drove into the line and threw a sweet behind-the-back pass to Danny Green for a three in the corner. He also faked out Roger Mason Jr. and got him out of position inside, flipping around and knocking down a fadeaway before being fouled. In 14 minutes De Colo had four points, two rebounds and two assists. Hornets rookies Anthony Davis and Austin Rivers scored 18 and seven points respectively.