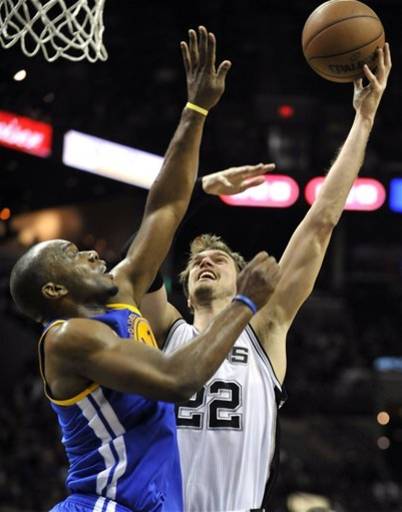 The Golden State Warriors went into last night’s game with the San Antonio Spurs hoping to end a few streaks, the Spurs’ 13-game home winning streak and trying to get a win on the road against the Spurs for the first time since February of 1997.

Unfortunately for the Warriors, it was going to take more than a bent rim to stop the Spurs' winning ways against them at home. Minus Stephen Curry, the Warriors once again found themselves as victims to the Spurs at home in the Duncan era.

Duncan’s 24 points, 10 rebounds and three blocked shots had more than a little to do with that as did Tony Parker’s game-high 25 points and eight assists.

With the win, the Spurs are now 31-11 with an 18-2 home record, good enough for third in the Western Conference behind the Oklahoma City Thunder and Los Angeles Clippers.

Before the game, Jose Grijalva picked Tim Duncan vs. David Lee to be the matchup of the game. While the Tony Parker vs. Jarrett Jack was equally fun to watch, the Duncan-Lee matchup had its share of moments and eventually Duncan came out ahead this time,

The Warriors will be tested with Stephen Curry's recent ankle injury so the Warriors may be looking for David Lee to score and carry some of the load for the team. Duncan and Lee will be an exciting matchup with both being able to shoot and score in the paint…Lee is not known as a physical player and Duncan can exploit that on the offensive end by posting up.

They’re a good team. We tip our hat off to them. You look up in the arena and they have banners. They’ve been there before and been together for a while. They didn’t have Manu (Ginobili) tonight, but they played well. I think we did a good job of controlling the game for the most part and just late down the stretch we weren’t able to hit shots and execute and they came up with the win.

16 – Years since the last Warriors win in San Antonio.
4 – Spurs in double figures. The Spurs relied on their starters for scoring while the bench struggled.
19 – Points by Tiago Splitter to go along with nine rebounds.
2 – Consecutive games the Spurs have limited opponents to under 90 points.
14 – Consecutive home wins.

One of Splitter’s biggest knocks in the past has been lack of consistency, which hasn’t made him a very good fantasy target. It’s pretty safe to say that you know what you are going to get out of him now.

He’s had five straight games in double figures, is contributing five plus rebounds per night and is usually good for a block or two. Aside from that, Splitter’s shooting percentages have been stellar as of late and he’s shooting just under 60 percent from the field on the season, good enough for third in the NBA.

Nando De Colo played just 4:21 last night, finishing with two rebounds, one steal and being the recipient of one death stare from Spurs coach Gregg Popovich after De Colo left has man and got caught behind a screen trying to double back, resulting in a Warriors three-pointer.