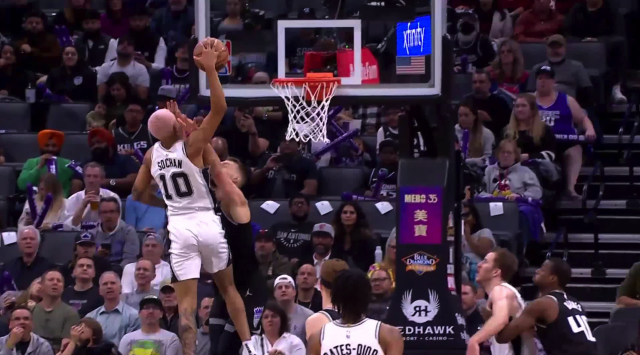 The Spurs may have lost 130-112 to the Sacramento Kings last night, but Spurs Twitter is full of praise for Spurs rookie Jeremy Sochan. The 19-year-old from across the pond had a “filthy” dunk over Domantas Sabonis that will be used in highlight reels throughout his career. Spurs play-by-play announcer Dan Weiss proclaimed the rookie as “Sochan The Destroyer,” The Spurs bench erupted players on the Kings’ bench were visibly shocked. Let’s take a look at the dunk and the fan’s reaction.

The Spurs never led in the contest but in the 3rd quarter, the silver and black came close several times. Keldon Johnson was a last-minute scratch he sat out with ankle soreness, so Devin Vassell led the charge. Vassell had tied his career high 29 points by the final buzzer, but without a doubt, this dunk from Sochan was the play of the game.

That was amazing lets see it from this angle again!

From start to finish the play is spectacular. First, the Spin move to lose De’Aaron Fox, then not only did Sochan dunk over Sabonis but he was also slapped in the face and still finished the slam dunk.

Spurs Guard Josh Richardson had this to say after the game, “The spin- that was a good move. He is very versatile and we are all learning that. The game will slow down for him eventually, but he shows flashes, and that was a big flash.”

For the uninitiated, fans have dubbed Spurs star Johnson and rookie Sochan a bromance. Johnson has a childhood photo of Sochan as his profile picture on Instagram and a few days later Sochan responded by posting a childhood photo of Johnson as his profile picture. So it was no surprise that Johnson had a big reaction to Sochan’s dunk. One Twitter user said, “Find someone that looks at you the way Keldon Johnson looked at Jeremy Sochan.”

Find someone that looks at you the way Keldon Johnson looked at Jeremy Sochan. pic.twitter.com/R0ZkhABaQi

Johnson also posted his reaction on his Instagram stories 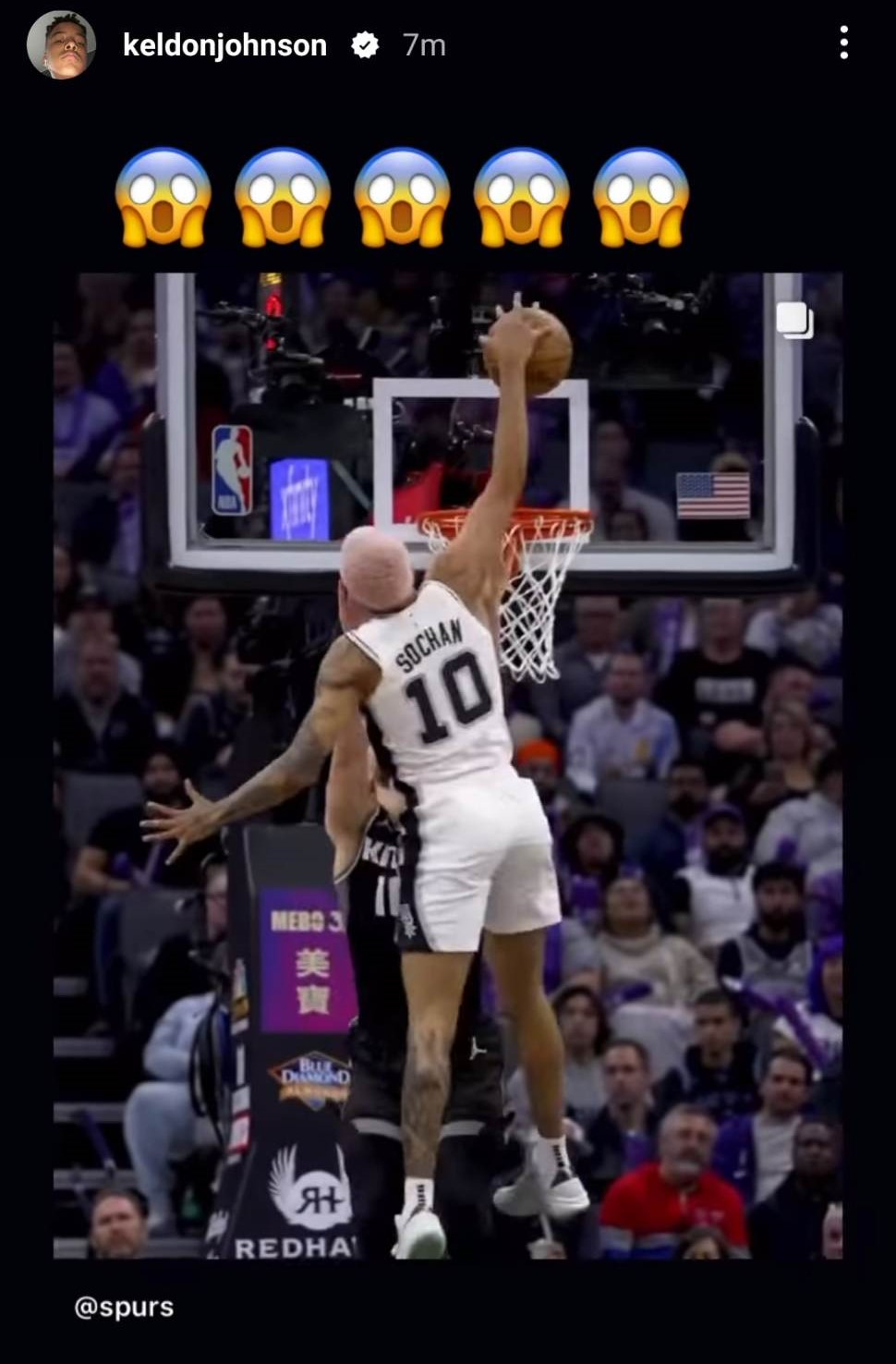 The Kings’ Bench Was Shook

If your think this is just Spurs fans hyping their guy and Sochan’s teammates are just supporting him, look at the reaction of the Kings’ bench. As one Twitter user said, “This reaction is all you need to know.

The Spurs lost this game by 18 points and had Johnson played some fans think this would have been a win for the Spurs because Johnson has contributed 20 points regularly this season. As Sochan develops into a star talent, every game he shows that he is a vital piece in the Spurs’ rebuild.

What was your reaction to this Jeremy Sochan dunk?