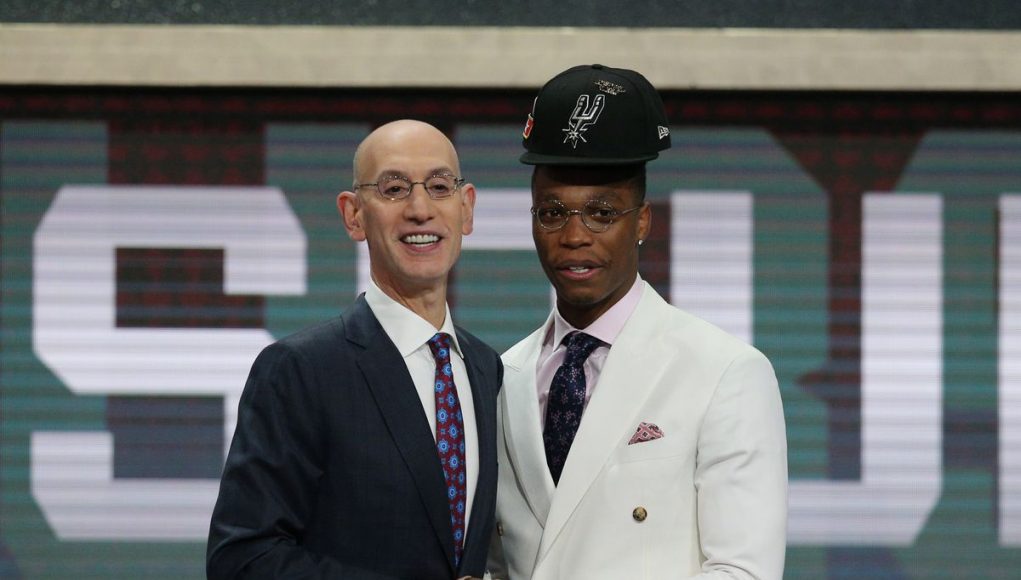 BARCLAY’S CENTER – Lonnie Walker IV wiped his eyes and hugged his family as the San Antonio Spurs selected him with the 18th pick in the 2018 NBA Draft.

The pineapple-haired 19-year-old wants to prove every team that didn’t pick him wrong, but that’s not why he was crying. They were tears of joy from a kid who grew up in a poor neighborhood, worked hard, and against all odds can finally provide for his family.

Reading is one of the poorest cities in America, with nearly 40 percent of its 88,000 residents living below the poverty line. Lonnie Walker III played college hoops there at Alvernia University, and he has since been inducted in their hall of fame. On Thursday night, fans in Reading went ballistic for their native son, celebrating with fireworks and raucous cheers.

The scene at FirstEnergy Stadium as @lonniewalker_4 is drafted with the 18th overall pick. The Reading, PA native is a San Antonio Spur. pic.twitter.com/3xQwY6ryXw

“That community motivated me and taught me a lot of things, and I’m proud to represent that city and that community,” said Walker. “I’m happy to show the youth that you can do anything you want as long as you put in the work and hold yourself accountable.”

“Hungry” is a word that gets overused in describing athletes. It doesn’t get much hungrier than sharing Doritos with mom for breakfast, and every bit of that hunger shows when Walker talks about the challenge ahead of him.

“I’m ready to get after it right now,” he said. “If they wanted me to work out and practice right now, I’d do it.”

The 6’4” shooting guard does a little bit of everything on both ends of the court, but the most important thing he brings to San Antonio is explosiveness, energy, and a willingness to do whatever is asked of him.

“If Coach Popovich needs me to dive on the floor strictly, then I’ll strictly dive on the floor,” said Walker. “I’m going to do whatever it takes for us to get that win, and sooner than later, hopefully, receive that championship.”

In between a million silly questions about the draft cap that had no hope of fitting over his large, vertical hairdo, the NBA’s social team had Walker act out a few .gif reactions for the camera. A fist pump, dance moves, and a reaction to a crazy dunk were all requested.

“I got beef with most hats”
-Lonnie Walker
??? pic.twitter.com/nEMHMCL3Ny

When told to act out the celebration of his first NBA game-winner, he repeatedly asked the small room if they were ready. They nodded, but still jumped at the primal battle cry that erupted from his soul. It was pure emotion, though it’s unclear what emotion exactly. It was raw and genuine, and totally awesome.

Leading up to the draft, the curious, quirky Walker was pegged as one of the most interesting characters in the class. He doesn’t think the Earth is flat, but he does believe that images of the Earth and moon have been altered. One of his favorite conspiracy theories is that Hitler faked his death and escaped Germany. He also has more, er, conventional subjects of interest, like nature documentaries.

The stories about him talking everything except basketball with Miami coach Jim Larrañaga sound a lot like the chats Pop had with Tim Duncan before they won any championships together. Walker said that the Spurs interviewed him at the combine, and the questions were mostly about life.

Clearly, the young man made an impression. Spurs GM RC Buford said that San Antonio, like many others, thought Walker would be gone by the time they picked. When he slipped to 18, the Spurs submitted their annual entry for the steal of the draft.

It was reported during the proceedings that teams were passing on Walker because of concerns about his health, but he says he feels great and ready to contribute on day one.

“I did all my workouts and I still look healthy,” said Walker, who mentioned his 40-inch vertical leap and 3.06-second ¾ court sprint, which was third fastest at the combine, as evidence that he is a-ok.

“I’m ready to compete, and at the end of the day, I want to be the best,” said Walker. “I’m addicted to being the best, I’m obsessed with being the next great.”

Walker doesn’t want to be just great; he says he wants to show the world that he’s better than Deandre Ayton, and Luca Doncic, and the other 15 players selected before him.

“It’s time to be a dog, and it’s just that simple,” said Walker. “I’ve got something to prove.”