The San Antonio Spurs are continuing to cement their footprint across the south and central Texas regions. On Thursday morning, the Austin Spurs announced that on December 11, 2022 they will play a home game away from the H-E-B Center at Cedar Park. The G League squad travels to Laredo and will host the Mexico City Capitanes inside the Sames Auto Arena. This game away from Austin falls in like with what their affiliated San Antonio team is doing this year, playing home games in Austin and Mexico City.

According to the announcement, it will be just the second time that the “Silver and Black” has played in Laredo. The previous contest was a San Antonio preseason game against the Houston Rockets in Laredo, which they won 79-69. December’s game will be the first time that the G League affiliate has played a home game in the city. As the team will be jockeying for position in the second Showcase Cup tournament, it will be an important contest.

Who is On the Austin Team?

Just who makes up that team when Austin travels to Laredo, however, remains to be determined. The NBA preseason concludes for San Antonio on Thursday night against the Oklahoma City Thunder and by next Tuesday, October 17, at 5 p.m EST / 2 p.m. PST, the NBA roster must be trimmed down to 17 players. The annual G League draft will take place on October 22nd, with training camps from October 24 – November 3 according to the league calendar. Final rosters will be set that same day. San Antonio, of course, may have a couple of NBA players on the Austin roster by the December game, including one or two of the franchise’s three new rookies. Two-way contract players Jordan Hall and Dominick Barlow are likely to play in the contest.

🚨Official: The Austin Spurs will host a game in Laredo for the first time in team history on Sunday, Dec. 11 at the Sames Auto Arena as part of Spurs Sports & Entertainment’s efforts to deepen their fanbase & better reach their fans across the team’s region from Mexico to Austin pic.twitter.com/4z1E2FsjfU

How to Buy Tickets to the Game

Tickets will be available to the public for purchase on October 21 at 10 a.m. CST, both online and in person. Fans can go to SamesAutoArena.com or to the arena’s box office. The first 500 fans to buy their tickets in person at the arena will also get to have their pictures taken with the San Antonio Spurs’ five NBA Championship trophies.

What are the Austin Spurs?

The Austin Spurs are the G League affiliate of the San Antonio Spurs. Until 2014, the team was known as the Austin Toros before adopting the parent club’s moniker. In 2017, the G League rebranded from the D League as part of the organization’s relationship with Gatorade. Austin continues to serve effectively as a developing/scouting ground as it has for the last decade.

A number of San Antonio standouts have played for the Austin Toros/Spurs, including Cory Joseph, Kyle Anderson, Dejounte Murray, Derrick White. In fact, every rookie draft selection since 2018, has played in Austin with the exception of Devin Vassell. The franchise has twice won the league title, both in 2011-2012 as the Toros and in 2017-2018 as the Spurs. 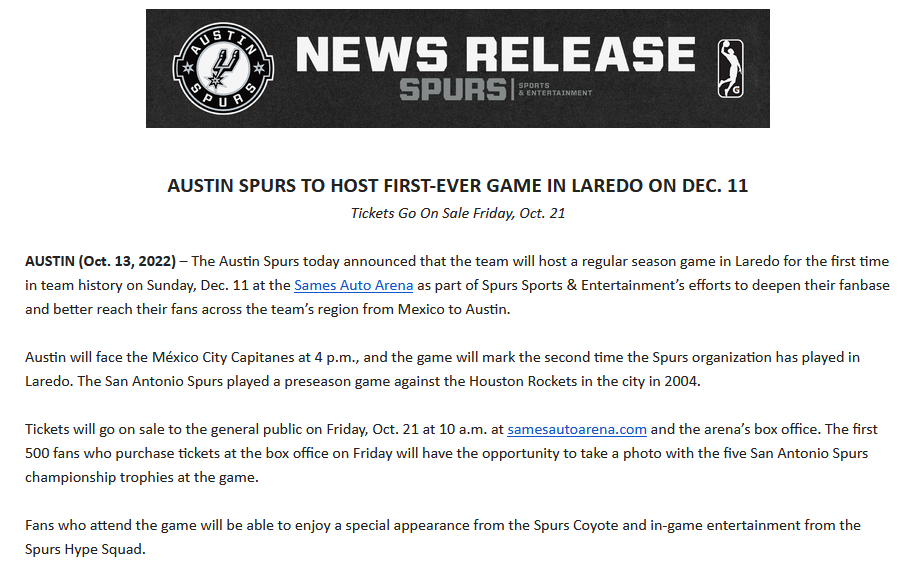