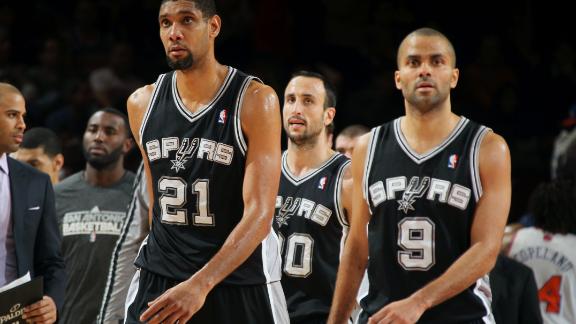 This week San Antonio Spurs' Tony Parker and Tim Duncan were selected to the NBA’s Mid-Winter Classic in Houston with coach Gregg Popovich more than likely to coach the West All-Stars.

While it will be great way to cap the first half of the season, the team needs to make sure everyone makes it to the All-Star Break healthy and prepared for the remainder of the season.

If last season’s playoff run taught us, is the bench must be ready at all times to pick up or maintain the pace the starters establish.  The frustration level kept on climbing in last season’s playoff series versus the Thunder.  You would see the starters giving it all they had to build a lead or erase a deficit, only to have the bench, which came up big in the regular season, not knock down the shots or make the stops.

Every time the Spurs seemed on the verge of turning corner, the bench would either miss a big shot or fail to get a defensive stop which would help the Thunder remain on top.

With head Popovich’s establish patterns of saving the “Big 3” during back-to-back games or games where things have gotten out of hand, one option would be to have the bench play big minutes during crunch time. That way, the bench logs critical end-of-game minutes and experience

With the playoffs being a game of runs, the confidence must be at high levels for the likes of the Gary Neal, Stephen Jackson and Matt Bonner.
With their athletic ability and fresh legs, teams like the Grizzlies and Thunder have created problems for the Spurs.  More playing time for Kawhi Leonard, Boris Diaw and Corey Joseph during the second and third quarters would not only give them experience but save the legs of Tim Duncan, Manu Ginobili and Tony Parker.
Leonard will especially need to log major minutes during crunch time in the playoffs to keep up with the athletic 2s and 3s they will see in the playoffs.
Momentum is another underrated attribute to have in your corner.

In the past, Pop has been known to treat end-of-season games, with playoff positioning decided, just like pre-season games.  At times, the Spurs had lackluster starts during the playoff’s opening series. Playing the starters a little bit will help them keep their edge and keep them in game shape as opposed to working themselves back in to a groove.

I understand that maintaining momentum and development of the bench’s confidence are not things that can be done simultaneously, but that is why Pop is the coach and responsible for finding the balance so both can be achieved.
The Spurs are on pace to finish the first half of the season in a manner they are accustom to — in first place and hopefully with a healthy core.
Now the Spurs need to enjoy the rest and get everyone on the same page for the big playoff run.