The Austin Spurs are looking to bounce back after a big-time loss at the hands of the Rio Grande Valley Vipers. RGV was completely dominant in the Spurs’ loss on Monday, December 5th at the Bert Ogden Arena in Edinburg. RGV now is on a six-game winning streak and looks to take their third win of the season against Austin at home. The struggling Spurs are in need of a major win in order to get the season back on track. If they can get a victory over one of the best teams in the league, that will build confidence to go throughout the season.

This has been a disappointing run for the Spurs over the past few games. A losing streak has begun to brew, and after a big blowout loss to RGV on Monday, Austin needs to stabilize itself and try to gain some time of positive momentum at this point in the season. In the loss on Monday, Jalen Adaway was the top scorer with 17 points while Jordan Goldwire had 13 points and seven rebounds. It was not a productive night on Austin as they were held to under 100 points by a stout RGV defense.

The Spurs were having trouble containing and winning the frontcourt battle, and this is a cause for concern for all Austin fans. The Spurs have been desperately needing center Charles Bassey, who has been the team’s best performer this season. However, Bassey was not active for these past two games, so it will be interesting to see how Austin adapts to playing without him.

One of the hottest teams in the G-League this season, The RGV Vipers are looking on a roll and ready to compete for a title. Darius Days was the man of the day on Monday, with 24 points and ten rebounds, continuing to have a major effect in the frontcourt for RGV. Rio Grande Valley has looked solid so far this season, much to the success of their team-first, physical style of play. They want to dominate the frontcourt as much as possible, and with players like Days and Willey Cauley-Stein on the roster, it makes it a tough matchup for any team. Austin will certainly have their work cut out for them as they look to break the losing streak and end RGV’s six-game winning streak. 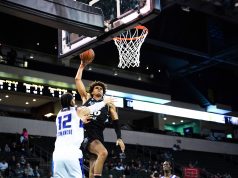