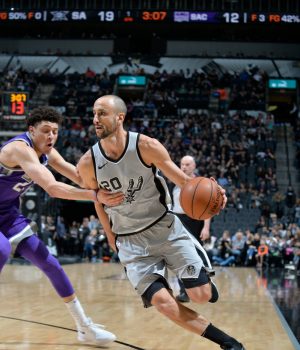 SAN ANTONIO – A strong second half lifted the San Antonio Spurs to a 113-98 victory over the Sacramento Kings (15-34) at the AT&T Center on Sunday night.

The win saw the silver and black bounce back from an ugly defeat to the Philadelphia 76ers on Friday. After a sloppy first half, the Spurs outscored the Kings 30-19 in the third quarter and blew the game open, never trailing again.

Here is what went good and bad for the Spurs, as well as three standout players: Bryn Forbes, Manu Ginobili, and LaMarcus Aldridge.

Bryn Forbes: With Danny Green struggling, Coach Pop looked at Bryn Forbes and told him to start the second half. He answered his coaches call with one of the best performances of his young career. It is easy to see why Pop has such high praise for the former Michigan State standout.

Forbes finished with a team-high 23 points on 9-of-15 shooting and went 5-for-8 from three point range. The 23 points were a season best for Forbes, who proves time and time again to be a solid fill in on the scoring end where Green has struggled in the past.

If the Spurs can get Forbes’ scoring on a consistent basis along with Green’s defense, San Antonio could have a nice combination going forward.

Aldridge scored 15 points on 6-of-17 shooting to go along with seven rebounds. It was a rare off game for the NBA All-Star forward, but the game did prove something. What it showed is that LaMarcus does not always have to do a bulk of the scoring. He can have some off games and the role players can fill in when needed.

Manu Ginobili: Its always good to see Manu Ginobili on the court and its even better to see him still impacting games even at age 40.

Ginobili returned after missing the past six games with a bruised right thigh to score 15 points in 25 minutes of work. The Spurs legend weaved his way to the paint, connected on two three pointers and just brought some joy to see him back on the floor.