A return for the NBA has gained momentum in recent weeks as the US begins to re-open states and ease lockdown measures, and as news comes in through different events across the US and also from larger scale events held in Europe, it look as there there may be a possibility for the NBA to return a little earlier in the summer than some may have thought has dates for late June or early July are now looking to be a little more realistic.

Both the owners and players are in favour of a return – the majority say they’re ready to come back as long as it’s safe to do so – there have also been suggestions to just how this would be done, with nods toward a ‘bubble’ or ‘bubbles’ where games could be played – the MGM Hotel in Vegas and Disney World in Orlando have both been considered possible locations as areas where all the players and teams would come together – they would be tested before they enter, and if they were to leave this ‘bubble’ then they would have to be retested upon re-entry. 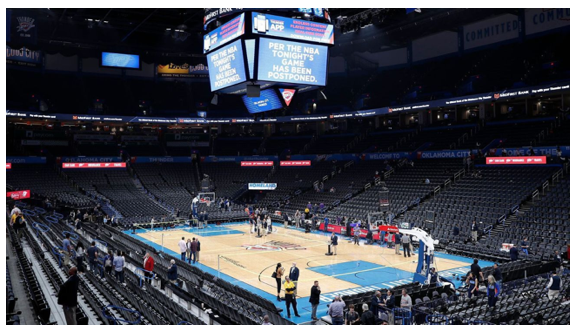 This has already been successfully done elsewhere – in Germany, the Bundesliga, a soccer league had managed to get underway the weekend past as a number of games were held without incident – although a number of players would test positive, the games went ahead on schedule with those players being placed in quarantine. Given the league would like to see the season seen to completion, a lot of games are being packed tightly together, up to eighteen per week – it is suggested the same could be seen in the NBA as efforts for all games to be played are put forward with playoff games taking place every other day.

The same is also true a little closer to home as the UFC has recently found success in getting combat sports back on the box for fans – despite a small hiccup with one of the athletes also testing positive, three events were held over the course of a week to great success as there were no disruptions to the event – this helps pave the way at home for how events can be held and managed successfully despite the current global crisis.

Good news for the businesses that rely on these sporting events too – following the recent UFC events betting, casino, and bingo sites not on gamstop still had announced that the event had been the most bet on event in the UFC history, but the successes here and elsewhere are a great sign. It does have to be said, however, that for the foreseeable future all of these sporting events will continue without any fans in attendance as concerns for infection will remain – some suggest that this measure may last until the new year but as social distancing looks to remain for the longer term it is still very much an unknown factor – for now fans will just have to rely on the live broadcasts held instead.