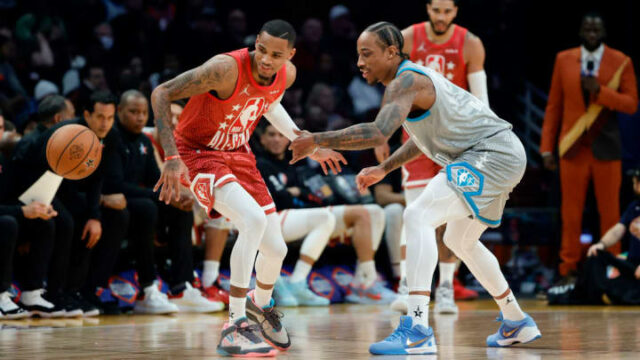 As the All-Star break comes to a close, the Spurs return to their annual rodeo road trip this Friday in Washington. They are 3-2 so far through five games; during which, they have had to somewhat redefine their identity after sending Derrick White to Boston. As they return to action against the Wizards, here are a few storylines to keep an eye on.

In a week where Spurs fans were still conflicted on how to feel about the Derrick White trade and how the starting lineup will look going forward, Dejounte Murray absolutely solidified himself as THE GUY. In Atlanta, DJ put up an absurd 32 points, 10 rebounds, 15 assists and 4 steals. He then followed it up the next day with another fantastic performance posting 31 points, 12 assists and 2 steals, becoming the first player in history to record at least 30 points and 10 assists with 1 or fewer turnovers in consecutive games.

But more importantly, he garnered this gem of a tweet from Manu:

It was also very polite of Manu to preface the tweet with (spurs)… just in case we didn’t know.

Since the Derrick White trade, Murray is averaging 25 points, 7.5 rebounds and 11.5 assists per game… all while barely turning the ball over AND still leading the league in steals per game. It’s been pretty clear this season that the Spurs have their centerpiece going forward, now it’s about surrounding him with the right people.

Lonnie Breaking Out of His Slump

The Lonnie Walker experience, so far, has been very up and down. As a Spurs fan, we all have memories of moments Lonnie flashes unreal potential and takes over offensively for a stretch (his coming out party against the Rockets will always be burned into my brain). However, we also have plenty of examples of Lonnie looking out of control at times and turning it over in back-to-back possessions.

When he was in his slump, it looked like Lonnie was constantly trying to play at 100 mph. The ball would swing to him, and he would try so hard to just explode by his defender and make something happen that he would often over-penetrate and turn the ball over or force up an off-balance shot.

He was playing like someone who was aware he was in a slump and was trying to break out of it in one play.

Lonnie seemed to break out of it this week (17 pts 61% vs pels, 21pts 52% vs bulls, 17 pts 37% in all around sloppy offensive game from everyone). He looked much more decisive in everything he was doing on offense, cutting to the rim, operating in the pick and roll, or pulling up in rhythm, everything he did just looked much more under control.

DJ is the leader of this squad for the foreseeable future, but Keldon may very well be the engine. There’s no question Dejounte runs the show, but when Keldon is rolling offensively, the whole offense seems much more dynamic. In his first 4 games since the Derrick White trade, Keldon’s averaged roughly 19 points per game and has looked like someone ready to shoulder more of the offensive load going forward.

At this point, it’s safe to say Keldon is a certified sniper when spotting up from 3. On the season, he is shooting 42.5% from beyond the arc on 4.5 attempts per game, so this isn’t a small sample size anymore, he’s shooting at volume now and knocking them down. And his makes look great, I swear when he hits his threes he absolutely smokes the net every time.

It’s been an up and down week for Vassell offensively. Coming off his homecoming against the Hawks where he lit it up with 20 points on just 13 shots, Devin struggled to find his shot against the Pelicans and the Bulls before picking it back up before the all-star break against the Thunder.

It’s no surprise to see a little bit of growing pains offensively as he learns to play complimentary to DJ and Keldon in the starting lineup. But you can see it in his game that he can shoot from just about anywhere on the floor, it’s just going to take time for him to learn where to pick his spots offensively.

Defensively, however, Devin hasn’t skipped a beat, his on-ball defense is great and his ability to play passing lanes off-ball is very similar to Dejounte’s.

There is so much potential for Dejounte and Devin to wreak havoc on opposing offenses with their length.