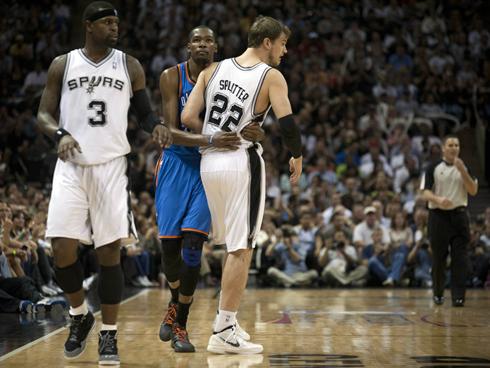 score his 30,000th point (congrats to Kobe even though most of us really don't like him).  Stern was nice enough to join the Hornets' broadcast crew and discuss several league wide issues.  Stern was asked specifically about the Hack-A-Shaq technique that's been used on Dwight Howard this season, and guys like San Antonio Spurs' Tiago Splitter and Clippers center DeAndre Jordan.  Stern said not only does he hate the technique, but he even tried to have it banned completely, not just in the last two minutes of a game (H/T to Kurt Helin for the link and Henry Abbott for transcribing the interview).

“I would have liked to have seen the rule changed to make the last-two-minute rule the whole rule,” he said. “It was getting to a point last year where, [in the] first period, they were just grabbing players. I think that’s ludicrous.

“We tried to change it to any time in the game because last year I guess it was everyone was fouling Tiago Splitter early on and the committee didn’t want to do it. And so that’s just the way it is. Because the reality is that there are a lot of basketball purists — and I understand that point of view — who say, ‘Hey, why don’t you learn to shoot foul shots? You’re supposed to be a pro.”

There's two ways to look at this.  First, Stern is again trying to crack down on a tactic that is employed by Gregg Popovich on a fairly regular basis, so it would definitely hurt the Spurs in that sense.  On the other hand, the Thunder used that tactic against Splitter and shattered his confidence, so maybe it wouldn't be such a bad thing.

In the end, I imagine this is a battle Stern will never win, but like he said, the purists will just call for guys to be able to make their free throws.