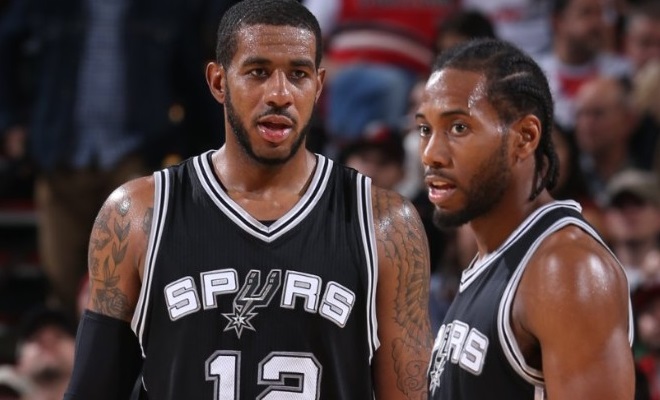 Despite a week filled with ups, downs, and scares of all kinds concerning the health of two star starters, the San Antonio Spurs were finally able to reach the top of the Western Conference.

Beginning last Thursday, during the highly-anticipated matchup between MVP candidates Russell Westbrook and Kawhi Leonard, San Antonio experienced their first of two major injuries this past week. Leonard left the competition in the third quarter of the 102-92 loss to the Thunder after taking a hit to the head. He went on to miss the following game, a 107-85 win against the acclaimed Golden State Warriors.

Also missing from the second win this season against last year’s top seed Warriors, LaMarcus Aldridge, who was diagnosed with a minor heart arrhythmia and was out indefinitely until being cleared to return after missing two games.

The Spurs, in spite of obvious uncertainty and concern over their star players last week, performed exceptionally well and managed to catch up to the number one seed.

Here is the most noteworthy news on the Spurs’ starters.

Aldridge played two of the Spurs’ previous four games scoring 17 points on 8-of-14 shooting and 6 rebounds against the Thunder, and 19 points on 9-of-24 shooting and 7 rebounds in the 110-106 loss against the Portland Trail Blazers. Aldridge missed the win against the Warriors and the 107-99 victory over the Atlanta Hawks, the game in which Leonard returned. The absence of Aldridge was definitely concerning to Spurs personnel.

Fortunately, Aldridge was cleared to return Wednesday night without any restrictions.

Although Leonard suffered a head injury against Oklahoma City last Thursday night, the MVP hopeful was able to return after missing only one game. Before his injury, Leornard scored 19 points on 6-of-15 shooting in 26 minutes in the loss to the Thunder. Upon his return Monday against the Hawks, he went 10-of-24 from the field for 31 points in 39 minutes and 34 on 12-of-21 shooting in the loss against Portland Wednesday night.

Though the Spurs matched up against an abbreviated Warriors team, the Spurs went without 3 starters, and a backup point guard as well. However, Mills stepped up big and contributed 21 points on 8-of-13 shooting in just 21 minutes to give the Spurs an early lead. The point guard shot 5-of-7 from beyond the arc and led the Spurs to their second season triumph over the top-seed Warriors.

Though Green has been mostly quiet over the current season, the shooting guard brought the 3-point heat against the Hawks, shooting 4-5 from 3-point territory and ending with 14 points.

Making contributions of his own, Lee stepped in for Aldridge during his absence. Lee held his own and shot 7-of-8 to end up with 14 points in 30 minutes against the Hawks.

With the season winding down, and a bout of injuries and scares enough to last the entire season, the Spurs should find comfort in knowing they have reliable backups.