With the playoffs fast approaching, you may ask the question: who must step up for the San Antonio Spurs? The most obvious response from anyone (national media down to the local fan) would be Richard Jefferson.

Jefferson is always the immediate scapegoat. His respectability diminished when he struggled to produce with the Spurs last season.

The scary sight for opposing teams is that on the rare occasion, Jefferson displays that hidden all-star ability (whether it is a 19-point scoring outburst or making “SportsCenter’s Top 10 Plays of the Night” with a thrilling dunk or dazzling layup) the Spurs can take their potential to another level.

Jefferson began the season playing at a high level early, but has deteriorated to a non-aggressive three-point shooter.

Jefferson must find a way to use these last eight games as an approach to find his playoff identity and a sense of who he is going to be through that run.

Will Jefferson awaken the hidden All-Star that lies dormant inside of him? Or will he continue to carry the tag of the “scapegoat”?

The Most Recent Memory of Jefferson

Monday night in the Spurs loss to the Portland Trail Blazers, Richard Jefferson had the opportunity to insert himself and make a real impact. Then, the team was missing all three members of the “Big 3”; the stage was set for Jefferson to prove he still has the potential to carry a team and can be more than just a three-point shooter.

How did he respond? He only took five shots and got to the foul line twice.

There are those out there who argue, “He’s the fourth option with the Spurs, he doesn’t get the amount of touches he got in the past with New Jersey and Milwaukee.”

Monday night was the perfect opportunity for Jefferson to get as many touches as he wanted, but to no avail, he only attacked seven times. Rookie James Anderson (5 points) and newly acquired swingman Danny Green (7 points) both produced more efficiently than Jefferson in much more limited minutes.

Let’s compare two Jefferson’s: the regular season version and the one currently slumping since the win in Dallas (I use this game because it was the last game against a contender where the Spurs had an entire healthy lineup.)

But since the Mavericks game, Jefferson has began to slip as you can see from his production.

Slumping Jefferson has been attacking the basket five times per game.

There are two questions to ask here: will Jefferson break out of his slump? And is the regular season Jefferson enough for the Spurs to win the NBA championship?

Home Cooking can break the Slump

Going back to the game on Monday night versus Portland, Jefferson was limited in his aggressiveness due to his five fouls. When a player is playing with that many fouls, being aggressive is something they consciously question.

There’s an old adage that said “home cooking does the body good.” You could apply this to how Jefferson performs with the “Big 3”. It’s a different environment playing with Duncan, Parker and Ginobili for 70-games then one day having to play with George Hill, James Anderson and Tiago 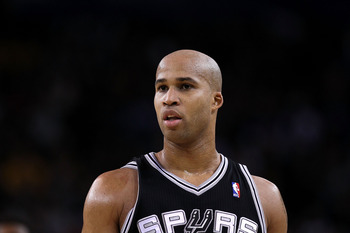 Splitter. Once the “Big 3” get healthy and the entire team is established back in their roles, Jefferson should be able to revert back to his seasoned self.

But will that be enough?

What “IF” Jefferson played to his potential?

I asked a question to several of my fellow writers who represent different outlets:

The question I asked them was: “If the Spurs were healthy and Richard Jefferson was averaging 17-points per game. Would they be the favorite to win it all?”

As you can see from the other writers, if Jefferson played like the player he has the potential to be, then the Spurs would be a stronger contender or more favorable to dethroning the Lakers.

Jefferson isn’t going to all of a sudden “get it” and increase his scoring to 17-points per game. Instead, it’d be progress if he could just be more aggressive and increase his scoring output to 14-15 points per game in the playoffs. If Jefferson were able to cut more, get loose balls, slash when he has a major advantage, this could be possible. Plus, since he shoots 43% from three-point range, he’d also be able to continue to rely on his three pointers.

Defensively, Jefferson has to have made an improvement this season because that’s the only way coach Popovich would give him 30 minutes per game. At times the Spurs do look like they run a four-man offense but Jefferson’s hidden play on the defensive end is what keeps him on the floor.

Jefferson is shooting 10 shots per game (including threes and free throw attempts). If he can find a way to increase that shot amount to just five more, then the possibility of him scoring 14-15 points isn’t too far-fetched.

Here is an example of how this could happen:

Fourth quarter- Jefferson hits a corner three pointer (17 points). Parker steals the ball, and then throws an outlet to Jefferson for the dunk (19 points).

That was an eight play drive but imagine he misses four shots, it becomes a 12-play game summary in which Jefferson was aggressive and made his mark consistently.

I don’t know what it would take to light a fire in him? Maybe the other players could pull him aside and say, “attack more” or maybe they’ve already gone through this with him? There is a small glimmering hope that he can somehow find a way to be more productive in these last eight games heading into the post season.

Jefferson is the scapegoat today; but if he could reawaken his sleeping potential, then he has a chance to become the hidden All-Star tomorrow.