1. How would you asses the Warriors at the midway point of the season?

Given that for a good part of the year, the Warriors have had some big injuries, the sample size is smaller than a full half year. David Lee, Andris Biedrins, Stephen Curry, #6 overall pick Ekpe Udoh, and Lou Amundson have all missed multiple games due to injury. Given that, for only a couple of weeks, the Warriors have had their full complement of players and we are starting to see what this team can be – which is good, not great. The Warriors are clearly a couple of players away from real contention. Their guard play has been very good and their front court play has been sub par.

2. Over the offseason, the Warriors traded for David Lee. How has the trade worked out so far?

It’s easy to say that the trade has worked out better for the Warriors than for the Knicks from a talent standpoint. David Lee is one of those players that has been injured so we haven’t seen him in his element for that long. What I’ve seen, I can’t say I’ve been blown away but I think he’s a nice player. I am most disappointed in the way he seems to get outrebounded. I am anticipating guys like DeJuan Blair to push Lee around a bit. I thought he was a more tenacious rebounder than he has shown so far. But, his offensive game is expanding and he’s a much better passer than I thought. On most nights, he’s the third or fourth best player on the team and I was expecting him to be #1 or #2. 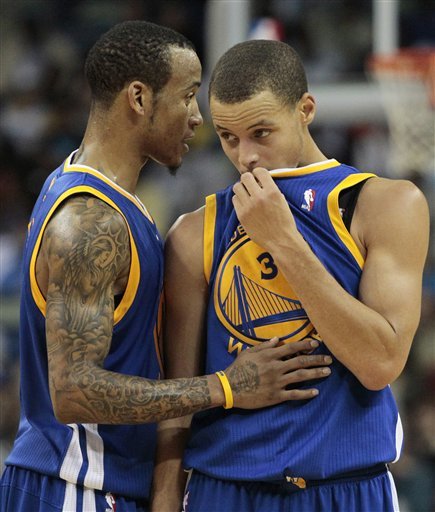 3. Looking at tonight’s game, we have a fantastic guard matchups: Curry, Ellis versus Parker and Ginobili. Is this the key matchup or is it at another position?

It is going to be the most fun matchup to watch for sure. Monta Ellis and Tony Parker are probably the two quickest players in the NBA, especially with the ball so that will be fun. Another key matchup will be at the #3 with the Warriors Dorell Wright and Richard Jefferson. Being a University of Arizona alumnus, I am a big fan of Jefferson. But Wright is having a great year and is shooting lights-out on threes. The player who wins this match-up might give their team the real competitive edge.

4. The last win Golden State had against the Spurs was back in 2008. Heading into tonight’s contest, how would you attack the Spurs?

That’s a tough one. I was at the game in Oracle a few years ago when the Spurs beat the Warriors by 40 and it still hurts. For the Warriors to win, Curry and Ellis both have to have their jumpers working and Andris Biedrins and David Lee have to limit the damage from Tim Duncan, DeJuan Blair and the Spur’s bigs. And, the Warriors have to commit to playing tough defense the entire game. It’s going to be a REAL challenge, no question.