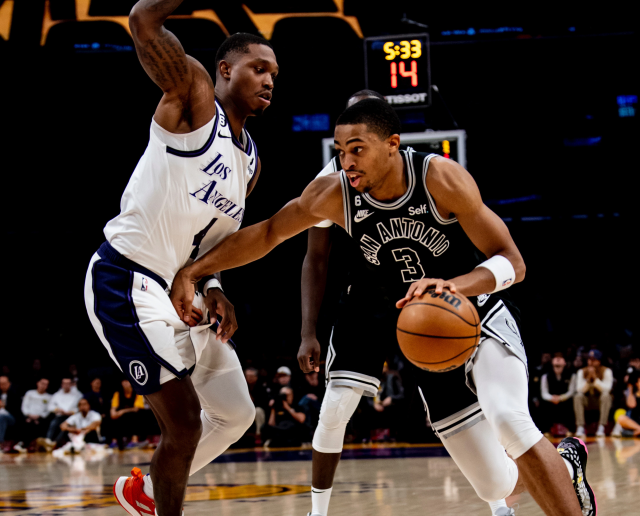 After having Thursday off to enjoy the Thanksgiving holiday, the San Antonio Spurs (6-13) get right back to work on Friday night as they host the Los Angeles Lakers (5-11). The first game of a back-to-back, against the Purple and Gold, it is the second time that the teams have met within a week, playing a contest in LA this past Sunday. San Antonio lost that game against the Lakers 123-92, despite Los Angeles still missing an injured LeBron James. “The King” is set to make his return to court on Friday night, however, creating an even greater challenge for the struggling Spurs.

Once again, the Spurs enter a game this season limited by injuries and will be without veterans Doug McDermott and Josh Richardson. Per Paul Garcia of Project Spurs, Zach Collins, Malaki Branham, and Jordan Hall are all set to play. For Collins, it will be his first action since suffering a fibula fracture earlier this month. San Antonio will still be without Blake Welsey as he recovers from a sprained MCL. Dominick Barlow isn’t available as he is with the Austin Spurs.

Updated Spurs Injury Report for their match up against the Lakers tonight.

Doug McDermott is out. He was a big contributor and spark for the team in the Pelicans game.

Zach Collins is back! pic.twitter.com/EijuawNDJp

Officially listed as “questionable” on the injury report, James is expected to play in one of the two games against the Spurs this weekend. How his availability is impacted by that of Anthony Davis is something to monitor. Riding a hot streak, Davis is “probable” for Friday’s game, dealing with a back injury. Missing the game due to suspension is defensive specialist Patrick Beverly who begins his three-game suspension for his actions the other night against the Phoenix Suns.

It has been two weeks since the Spurs last won a game and the team is on a skid, losing 11 of their 12 games this month. Slow starts continue to be a problem for the young team as they fell to 1-13 when losing the opening frame, following Wednesday’s game with the Pelicans. Injuries within the starting five may account for part of the first-quarter struggles, but spectators can see the energy just isn’t there. That may be a result of the struggling play of the team’s young leaders Keldon Johnson and Devin Vassell in the opening minutes.

Both Johnson and Vassell are averaging less than five points in the first quarter this season and shooting below 40 percent, despite being the squad’s scoring leaders. Together, they combine for nine of the Spurs’ 23 shot attempts in the first 12 minutes of a game. Frankly put, the rest of the team is shouldering the load while the young stars get calibrated. While the nature of those stats is negative, it is not an attack on the players or the coaching. San Antonio is a young team with low expectations. They will need Vassell and Johnson to be comfortable in the first quarters of games in the future, so these experiences now are merely growing pains. Heading into the contest with the Lakers, the game looks like it will start uncomfortable again.

Los Angeles has won three of its last five games and all without the services of LeBron. Davis has carried the load on both ends of the floor for his team in that stretch, and it appears to be taking a toll on his back, literally. The “probable” designation on the injury is for the league’s sake of transparency, taking account of Davis’ sore back. He was brilliant against the Spurs in their last contest, scoring 18 points in the first quarter and finishing the game with 30, though he didn’t play the last frame.

Role players Austin Reaves and Thomas Bryant really went off on San Antonio last time, combining for 36 points. An interesting game note for Friday is that it marks the first time that Lonnie Walker IV plays inside the AT&T Center as a visitor. The Spurs’ former first-round pick scored 14 points against them in last Sunday’s game and could have an even bigger night in the familiar arena.