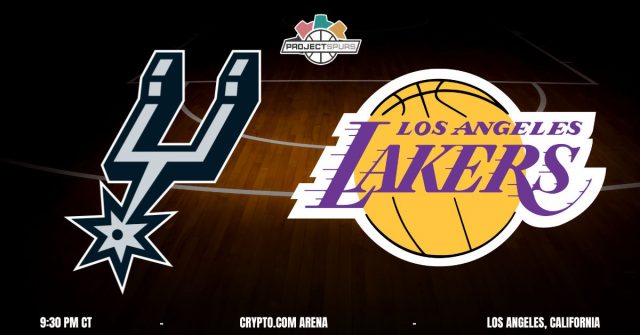 The San Antonio Spurs hit the road to Los Angeles for another late west coast matchup. This time, the Spurs vs. Lakers will take place at 9:30 PM Central Time at the Crypto.com Arena.

The Spurs are coming off a 20-point loss at the hands of the Portland Trailblazers on Monday night. The Lakers on the other hand are coming off a loss themselves to a fellow Los Angeles team, the Clippers.

The bookies have this one closer for the Spurs than any of their previous matchups in the past few games as only the 2-1 underdog at +200. The Lakers are the -250 favorites in the matchup. The Lakers are favored by 6.5 points with the over/under of the matchup sitting at 243.5. Odds are according to BetMGM.

How to Watch Spurs vs. Lakers

The Lakers have yet to submit an injury report as of 2:30 PM Eastern Time via NBA.com

This will be the fourth meeting this year between the rival Spurs and Lakers. The Lakers are currently 3-0 heading into the matchup after their three meetings back in November.

San Antonio will need to limit LeBron in this performance. LeBron James is coming off a monster 46-point performance against Kawhi Leonard and the Clippers. In the two games he played against the Spurs (injured in their first matchup), he posted 39 points in one matchup and 21 in the other. If the Spurs can limit LeBron once again to under 25 points, their chances will rise exponentially. If the Spurs can string together a strong assist night and share the basketball with Tre Jones leading the charge, the team will have a shot at victory.

For the Lakers on the other hand, they will need to limit Keldon Johnson and ensure that the Spurs bench doesn’t get going early. The Spurs tend to have to fight their way back after a slow start to their games this season. The Spurs do not have that player that will drop 40+ points every night, but they do have a tendency to have many of their players including their bench above double figures. Last time out, the Spurs had eight players hit that double-figure mark. Tune in tonight at 9:30 for this classic Western Conference rivalry.