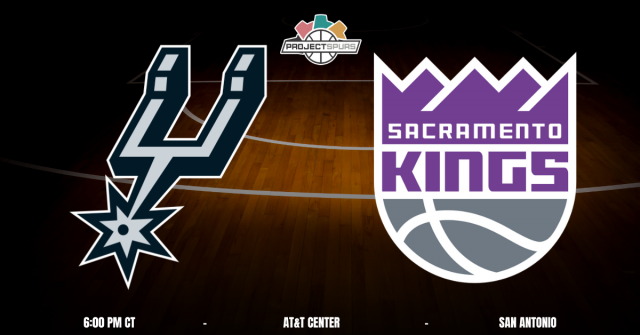 The San Antonio Spurs are coming off a historic game playing in the Alamodome for the first time in 20 years. Unfortunately, the Golden State Warriors were just too much for the young unit in San Antonio. Tonight, the Spurs have a chance to get back in the win column and snap their four-game skid against the Sacramento Kings.

The Sacramento Kings are currently on a three-game win streak after a 139-114 blowout victory against the Houston Rockets on Friday. The Kings are sitting comfortably at the number four spot in the Western Conference with a 23-18 record.

Back at the @attcenter tonight!

How To Watch Spurs vs. Kings

Injury report according to NBA.com as of 1:30 PM Eastern time.

For the San Antonio Spurs, their season is going straight towards experience at this point. With no hopes for playoffs, San Antonio will just continue to battle their best and finish the season with the hope of securing the number one draft pick. Despite all of the losses, the team has shown some positives. Unfortunately, without that superstar, the team struggles to put everything together.

Against the Golden State Warriors, Tre Jones was once again the leading scorer putting up 21 points. The point guard battle tonight against De’Aaron Fox will be another great matchup. Keldon Johnson will need to step up to the plate and deliver a 20+ point performance and control the scoring of Harrison Barnes tonight. With the trade deadline looming, the performances of Jakob Poeltl, Doug McDermott, and Josh Richardson are being closely watched by executives around the league.

The Sacramento Kings have been playing good basketball all year, despite the near .500 record the team sits comfortably near the top of the Division. Last game out against the Rockets, Harrison Barnes and De’Aaron Fox combined for 51 points. With the help of Terrence Davis, the team does have the lineup and talent to give the Spurs a rough time if they can put it together.