The San Antonio Spurs went “bombs away” on the Dallas Mavericks on Sunday, hitting 20 3-pointers against their I-35 rival. They came close to the 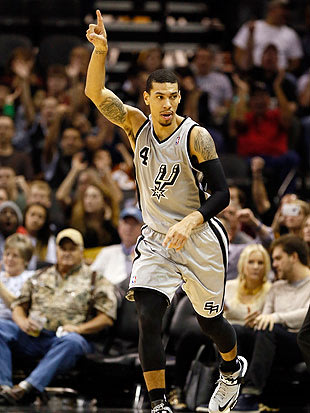 NBA record of 23, but even if they didn’t make history, it was a very impressive showing.

Leading the charge was guard Danny Green, who went 7-8 from outside, leading all scorers in the game with 25 points.

It was great to see Green lighting up the scoreboard, but his shooting has been incredibly inconsistent all year, especially from 3-point range. In fact, in the three games leading up to the game against the Mavs, Green was a combined 3-17 from beyond the arc, but it was only a few weeks ago that he went 7-9 against Charlotte.

Tony Parker said Green is still a work in progress, but that doesn’t mean the Spurs are going to keep him from shooting.

Green his shooting just under 40% on the year from outside, which is a very respectable number. The problem is that you just don’t know which shooter is going to show up on any given night.

I like that the Spurs show confidence in their young teammate, and let him shoot through his struggles because the reward is that he gives you games like the one on Sunday. Now it’s up to Green to pay back the Spurs for their trust and work on becoming more consistent.