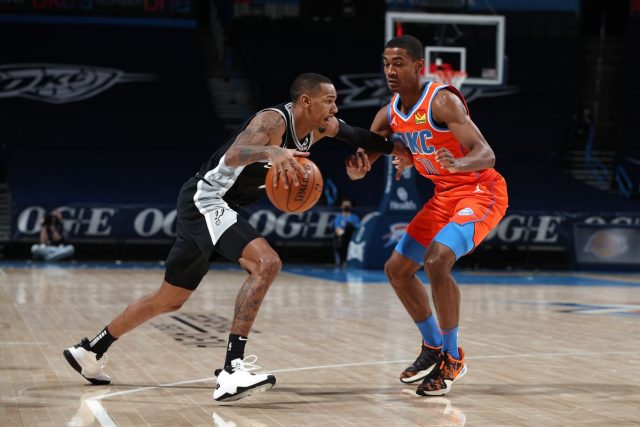 After four games were postponed due to health and safety protocols last week, the San Antonio Spurs are set to resume their 2020-2021 schedule Wednesday in Oklahoma City against the Thunder.

Tuesday the Spurs practiced for the first time since their schedule was postponed, but they announced multiple players will be out for Wednesday’s game.

DeMar DeRozan is out due to personal reasons, after his father passed away over the weekend.

Rudy Gay, Derrick White, Keldon Johnson, Devin Vassell, and Quinndary Weatherspoon are all listed as out due to health and safety protocols.

The Spurs will have nine players available Wednesday:

The team might be able to get LaMarcus Aldridge back for Wednesday’s game, after he practiced with the team Tuesday. Aldridge hasn’t played in a game since February 1, since he’s been dealing with a hip injury.

“We’ll reevaluate him tomorrow,” said Popovich of a decision on whether Aldridge will play Wednesday.

With nine players available, the Spurs meet the eight man roster criteria to play a game. If Aldridge can play, he’ll give San Antonio a 10th available player for Wednesday.

Popovich said the players who practiced Tuesday seemed winded, which is understandable since the whole team had been quarantining after the Charlotte game on February 14.

With just 40% of the players who are usually part of the 10-man rotation available Wednesday, Popovich acknowledged some learning will need to take place for the new lineups the team is building for Wednesday’s game.