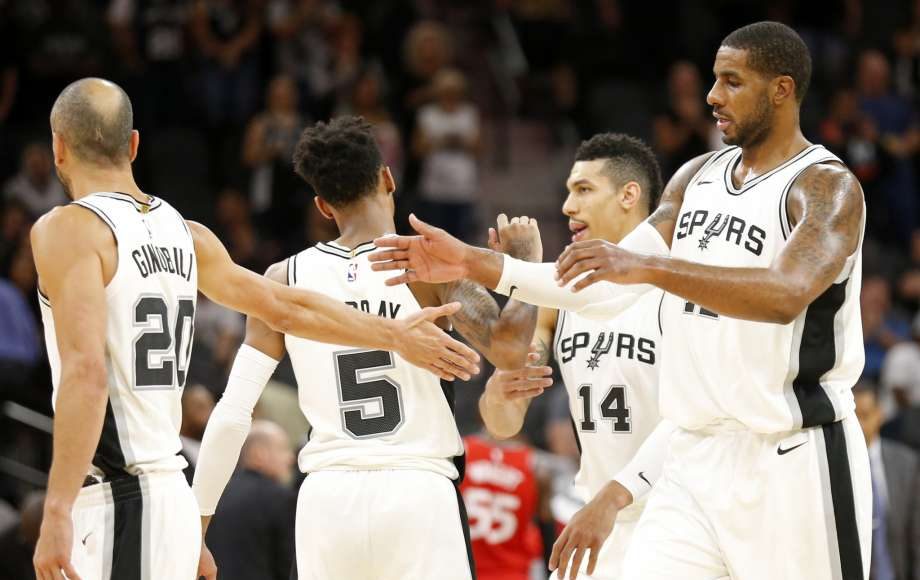 Most teams would struggle to win games and find an identity without the services of their best player who happens to be a favorite in the MVP race. The starters on the 4-0 San Antonio Spurs, however, have used Kawhi Leonard’s absence as an opportunity for growth.

Provided he returns to the lineup in the near future, the injury to Leonard might be the best thing that could have happened to the Spurs. His singular dominance on the floor turns everyone around him into a role player. With him out, the other Spurs have been forced to step up and take on larger roles, and they have the opportunity to create an identity separate from their superstar.

The 4-0 start is largely thanks to the substantially stepped-up play of LaMarcus Aldridge, Danny Green, and Dejounte Murray. It’s not just that they’re playing at a high level; they’re doing it in a way that shows vast improvement and growth. They are turning into the best versions of themselves.

Murray has provided a noticeable spark, throwing down hammer dunks and telling Pop to get used to it, while grabbing eight boards per game, and loudly encouraging his teammates throughout.

He seems to be the vocal yin to Kawhi’s muted yang. Where Leonard is in many ways the spiritual successor to Tim Duncan, Murray is quickly showing himself to be next in the lineage of Manu Ginobili. Murray has gotten a chance to grow that identity outside of the Klaw’s oversized shadow.

If you’re a Spurs fan, chances are you’ve screamed at LaMarcus Aldridge for being soft. You yell at him through your TV to play with some fire and take it to the rack. If you’re the anxious type, you audibly gasp when Danny Green attempts to put the ball on the floor. Your heart rate picks up, and in the extremely likely event that he misses the shot, you vent your frustration on Twitter.

Maybe they heard you.

Aldridge has taken on the responsibility of being the go-to scorer, and it seems to have lit a fire under him. He looks slimmer, more aggressive, and even a little angry. His mid-range jumper is as wet as it has ever been, and he’s shooting more threes and taking it to the rack with authority.

Here are his stat lines through four games: 25 points and 10 rebounds, 28 and 10, 20 and eight, 31 and seven. He also has six steals and six blocks on the year, as he’s stepping up to protect the rim. He’s doing it all with an intensity and an alpha-dog mentality that we have only seen glimpses of so far in his Spurs career.

The win over Toronto on Oct. 23 was a prime example. With 3:36 left, Green hit a shot in close (more on that later) to push the Spurs lead to seven. Serge Ibaka came at LMA with his elbows, and Aldridge took exception to the point of shoving him, drawing a technical, and being held back by his teammates.

When someone says Kawhi not top 3pic.twitter.com/ojOt6Or52H

The moment also highlighted the budding leadership qualities of Murray. He brushed off one of the winningest coaches in basketball history to grab a five-time All-Star eleven years his senior and said, “Don’t worry about that, let’s win this game.”

21-year-old Dejounte Murray just like, chill Pop I got thispic.twitter.com/jcrKmZveeB

Aldridge did just that less than two minutes later by channeling all of that anger into a vicious beat-down of Ibaka. He backed him down from 18-feet out into the low block, put his elbow into his chest on a quick spin move, and got right under the basket for an and-1. Ibaka fouled out, and the free throw put San Antonio up ten with 1:48 to play. That was the game.

Pay close attention to LMA’s demeanor throughout the game-sealing play. With tired legs, he banged down low and looked for the contact. Watch how he flexed after the shot went down, and the way he flicked his head dismissively at the 17-second mark.

His body language screams, “Get off me little boy, I’m the baddest man out here. Hold this L.” This is not the soft LaMarcus you know, and love to hate. Whatever Pop said to him in the offseason seems to have worked wonders.

Green also seems to have turned his biggest weakness into a surprising strength. His attempts to create off the dribble have given Spurs fans acute heartburn for the last six years, but he seems much more adept at making plays when forced to create in the early stages of this season.

Danny Green does this sometimes now I guess? It's pretty radpic.twitter.com/u0JELqDJyt

Last year, 70 percent of Green’s shots came from beyond the arc. This year, it has been just 45 percent. He’s hitting tough shots at the rim, dropping dimes on the move, and even nailing mid-range stepback jumpers. Now he poses a legitimate threat of creating off the bounce and attacking the rim.

Cool to see Danny add this to his game, he's becoming a much more well rounded scorerpic.twitter.com/sDaP3FxP1h

This forces defenders to respect the drive and opens up his shot of choice: the catch-and-shoot three. After shooting a respectable 38 percent last year, he’s hit a scorching-hot 48 percent from downtown out of the gate. The triple will always be the Tar Heel’s bread and butter, and he’s off to a fantastic start.

He’s averaging 14.5 points per game so far this year, which is twice his average from last year and would be a career high. He will take less shots and score less when Kawhi gets back, but in his absence, Green has gotten a chance to test out his new and improved set of scoring skills.

He was second-team all defense last year, and he has stepped up there with Kawhi out as well. Green has averaged two blocks through four games, which is nearly double his career high for a season. His 5.5 rebounds per game would also be the best in his career by a wide margin.

Murray, Green, and Aldridge have flourished on the court in these first four games. They have helped to make up for the loss of Kawhi’s productivity, and in doing so they have grown their individual identities.

Leonard is one of the top players in the league and deserves to run the offense and hold the ball a lot, but that takes touches away from the players around him and forces them into little boxes designed to help him. LMA, Danny, and Dejounte have expanded those boxes with Kawhi in a suit on the bench, and they’ll be that much more capable and confident when he comes back.

The biggest change might just be the attitude of the team. Kawhi, though extremely skillful, is not an emotional leader on the floor. He’s a quiet professor of basketball, wearing a tweed jacket with elbow patches. The team follows his stoic lead.

In the first few games, Murray has led Aldridge, Green, and the rest of the Spurs to be louder and more passionate on the court. In the words of Pop, they’re giving him some nasty. With a substitute in for the professor, the class seems to be having a bit more fun. It’s hard to measure the impact “fun” has on a team, but it seems to be instilling a great deal of confidence so far.