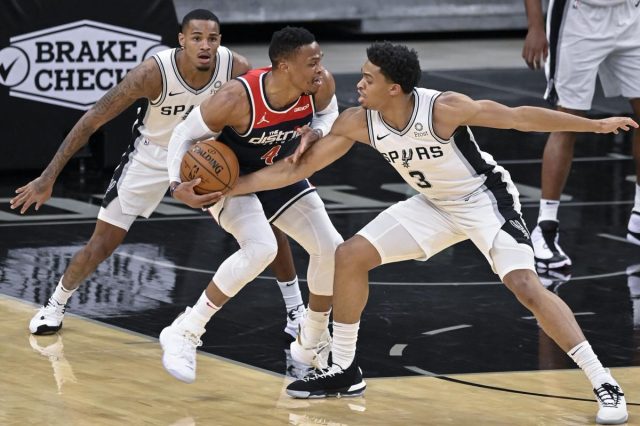 SAN ANTONIO – The San Antonio Spurs snapped a two-game skid by using a balanced attack to hand the Washington Wizards a 121-101 defeat at the AT&T Center on Sunday night.

The win not only snaps a two-game losing streak for San Antonio but pushes them back above .500 to get back into playoff position for the moment in the Western Conference, although the bet-nj.com odds may not have them in such favorable a position.

The game was the first for the Wizards since since Jan. 11 because they did not have enough eligible players due to the league’s COVID-19 protocols.

San Antonio snapped their losing streak by using a balanced attack with seven players in double figures led by Patty Mills’ 21 points. The Aussie set the tone off the bench as he shot 50 percent from three and remained aggressive in looking for his shot.

Lonnie Walker IV paced the starting unit with 16 points while LaMarcus Aldridge added 15. If the Spurs can continue to get a nice pace from the team on a nightly basis, it should make things easier on their star players.

Case in point: DeMar DeRozan had just nine points on 3-for-7 shooting. He was in foul trouble, picking up five but his scoring wasn’t needed on this night.

After some off games shooting from beyond the arc, the Spurs have gotten more consistent in getting their three-pointers to fall in the past few games. Sunday night saw the Spurs hit 48.4 percent from downtown, connecting on 15-of-31 shots.

Mills and rookie Devin Vassell combined for eight of those 15 while Walker had two. The key to the Spurs’ faster pace style is getting shots to fall and doing that on a regular basis.

While things may have been rocky for the first month of the season, it appears the Spurs are beginning to find their groove at the right time.

The Spurs defense has come through despite their slow starts as of late. Sunday night saw the Spurs hold Washington to just 101 points, well below the 121.5 points per game they had given up in the last two games.

With their defense starting to turn and the offense getting more consistent, the tide made soon turn for the young Spurs squad.

The Spurs are now 9-8 on the season and will return to the court on Monday night to face the New Orleans Pelicans at 8 p.m. from the Smoothie King Center.