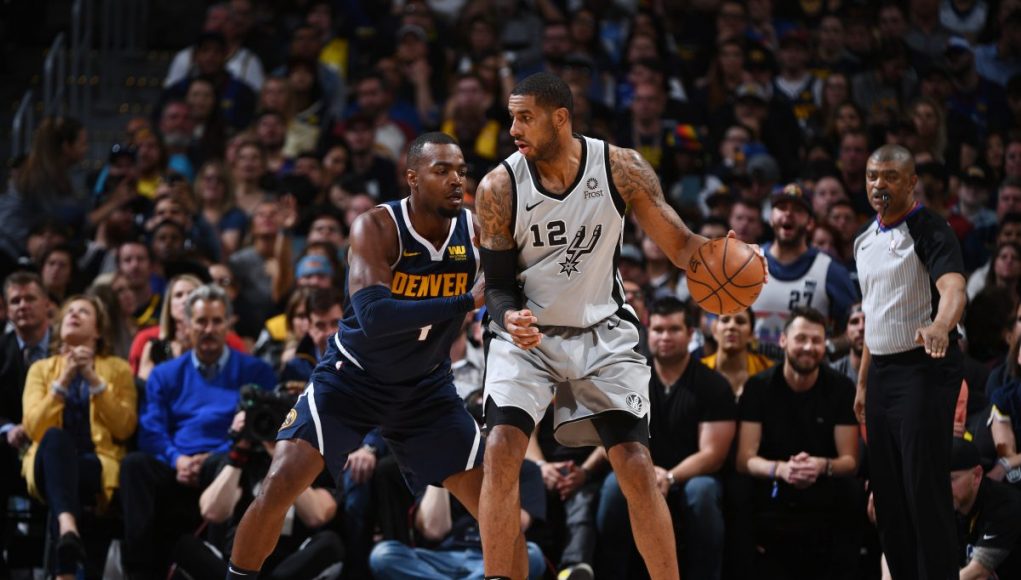 Trailing by 17 points in the second half and shooting cold as the 34-degree weather in downtown Denver, the San Antonio Spurs knew they would not quit.

It just is not who they are.

The Spurs would put together a furious fourth-quarter rally but it would not be enough to save their season as they fell 90-86 to the Denver Nuggets in Game 7 of their first-round Western Conference playoff series.

“They did a good job,” Spurs coach Gregg Popovich said of his team. “They’ve done well for themselves for never playing with each other before the season. They were quick to learn a new system. It is never good to lose but you have to congratulate the Nuggets.”

Here is what went good and bad for the Spurs, as well as three standout players: Rudy Gay, DeMar DeRozan, and Bryn Forbes.

After struggling the first few games of the series, Rudy Gay was a massive spark in a very forgettable first half for the Spurs in Game 7.

The Spurs’ leading scorer all season long struggled in Game 7 early but he helped rally the troops for one final battle in the final quarter.

DeRozan started 0-for-8 from the field but settled down as the game went on, finishing with 19 points on 33 percent shooting from the floor. He remained aggressive as he drove to the rim and got to the foul line six times.

“We were more aggressive in the second half,” he said. “We settled for jump shots and I think that’s what killed us. If we had that fight in the first half, I think we have a better chance of winning.”

One Spur who had one heck of a season was the former Michigan State Spartan. He not only become a starter but saw himself grow as a player, showing that off in Game 7.

Forbes finished with 19 points on the night as he went 3-for-4 from three-point land and was a major cog in the Spurs offense as they made their comeback.

“I don’t think we overachieved,” Forbes said. “I’ll always remember being up by 20 [in Game 2] and I’m going to take that into next season.”

The Spurs finished the regular season with a 48-34 record despite going 1-7 on their annual Rodeo Road Trip. They lost Kawhi Leonard and Danny Green to a trade, Manu Ginobili to retirement along with Tony Parker and Kyle Anderson to free agency.

They acquired DeMar DeRozan and Jakob Poeltl in the trade that sent Leonard and Green to the Toronto Raptors and added eight new faces. San Antonio lost Dejounte Murray to a torn ACL and Lonnie Walker to injury in the preseason.

Despite the odds and experts picking against them, the Spurs made the playoffs and challenged the No. 2 seeded Nuggets to seven games and nearly won the series.

The team may just be a piece or two away from contending for a championship in the near future. The Spurs dynasty is not dead, despite what some may say. It is just entering a new era.

“It won’t be the same team,” Popovich said. “Dejounte Murray is coming back and he is our best defender. It’ll be a different team, simply because of DJ. We were expecting big things out of him.”

The Spurs will now head into the offseason with much of their roster already inked for the 2019-20 season. The biggest question mark surrounds Coach Gregg Popovich, whose contract is now up.

For Spurs coverage during the offseason, head over to ProjectSpurs.com