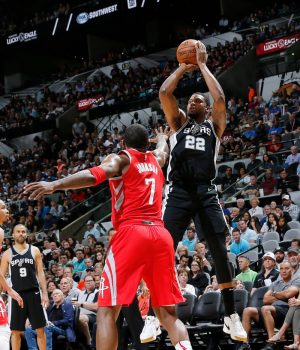 SAN ANTONIO – The San Antonio Spurs knew the importance of Sunday’s game against the best team in the NBA. They knew what was at stake and played exactly like it was do-or-die for their playoff hopes.

Rudy Gay and LaMarcus Aldridge combined for 44 points as they led the Spurs to a 100-83 victory over the Houston Rockets (62-15) at the AT&T Center on Easter Sunday afternoon.

Here is what went good and bad for the Spurs, as well as three standout players: Aldridge, Gay, and Dejounte Murray.

LaMarcus Aldridge: The Spurs’ workhorse this season once again came up big and did it against the league-best Rockets. Aldridge has not shot the ball well against Houston this season but that all changed on Sunday.

Aldridge finished with 23 points and 14 rebounds on the afternoon, shooting 11-of-19 from the field in the process. Houston double-teamed the All-Star forward early on but he managed to get into his groove in the second quarter. He used his signature fadeaway jumper to create space between he and Rockets big man Clint Capela, his turnaround jumper over Ryan Anderson and banged down low in the post.

It looks like Aldridge is ready for the postseason.

Rudy Gay: Aldridge got help from Rudy Gay, who is on the verge of just his second postseason appearance of his career.

Gay came off the bench to score 21 points on 9-of-13 shooting, leaving his mark with a thunderous dunk in the first quarter. The forward came off the bench and provided a massive spark as he was aggressive on both ends of the ball. If Gay can play like this on a nightly basis, San Antonio may go further in the postseason than many are predicting.

Dejounte Murray: Earlier in the season, Pop inserted Dejounte Murray into the starting lineup, leaving no doubt that the future has arrived in the present day. He showcased on a national stage Sunday why Pop made the move when he did.

Murray finished with 13 points on 6-of-14 shooting, with eight of those points coming in the opening quarter. The second-year guard showed no fear in going up against MVP frontrunner James Harden as he pushed the pace and drove to the hoop four different times.

Coach Pop has often been seen teaching Murray and instructing him on where he needs to be on the floor. This will likely give fans the memories of Pop doing the same with then 19-year-old Tony Parker. It is safe to say the Spurs are in good hands with DJ.

The Spurs are now 45-32 on the season and will return to the court on Tuesday afternoon when they travel to Los Angeles to face the Clippers (41-36) at the Staples Center with tipoff set for 9:30 p.m. CST.