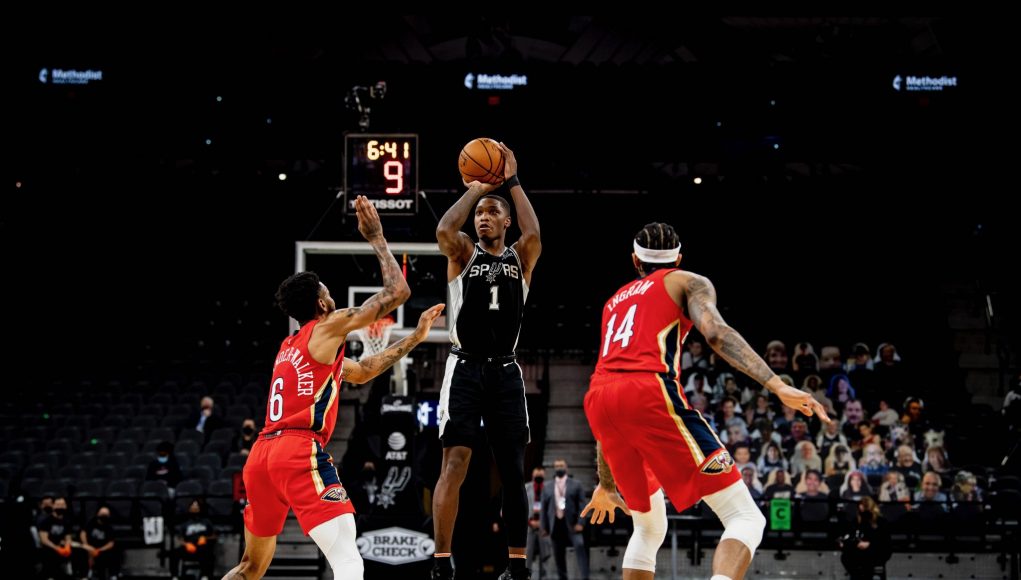 SAN ANTONIO — The San Antonio Spurs returned home to the AT&T Center to kick off a four-game homestand with a 114-111 win over the New Orleans Pelicans on Saturday night behind a big game from DeMar DeRozan.

With the win, San Antonio rebounded from their loss in Oklahoma City on Wednesday and are now 6-4 in their last 10 games. Overall, the Spurs have won six of their last eight games.

San Antonio had trouble containing Brandon Ingram early on as he scored 15 of the Pelicans’ 32 points in the quarter. The Spurs would rebound with a 34-29 second quarter to take a five-point lead into the locker room at halftime.

New Orleans (14-18) was led by Ingram’s 29 points as he shot 11-for-23 from the floor while Zion Williamson gave the Spurs all they could handle and posted a double-double with 23 points and 14 rebounds.

“A lot of people participated tonight,” Spurs Head Coach Gregg Popovich said. “Trey was fantastic…Defensively as a team, we reacted pretty well. Williamson got away from us there in the second half. But overall it was a great team effort and a fine win.”

In case you missed it, here are some key highlights from the Spurs win over the Pelicans:

When DeMar DeRozan was not selected as an All-Star, he knew he was ripped off. So he let his game on the court show why he’s meant to be among the greatest in the league. He did just that as he scored 32 points to lead the Spurs to a win over the Pelicans on Saturday.

DeRozan returned to the lineup after missing Wednesday’s game against Oklahoma City following the death of his father. He showed no signs of rust or fatigue as he slashed his way to the rim, pulled up for his signature midrange jumpers, and found his teammates for big buckets.

Down the stretch in the fourth quarter, he hit big bucket after big bucket. He allowed the double teams to come, passing the ball to his open teammates and went to the free throw line eight times in the period.

To be gone that long and not show any rust, and be able to have wind and play as much as he did as hard as he did.. He was special,” Popovich said of DeRozan’s play.

Coming into Saturday’s game, the Pelicans were giving up over four three-pointers per game and the Spurs read that scouting report, chucking three’s early and often. The Spurs connected on 10 of 19 shots from beyond the arc, led by Lonnie Walker IV and Patty Mills, who combined for six of those 10 shots from distance.

For the game, San Antonio finished 12-for-32 from deep as Mills and Walker hit the chunk of shots from beyond the arc.

Without question, one of the best players on the team in the past month or so has been Dejounte Murray. The guard put on a display on both ends of the floor on Saturday, propelling San Antonio to a six-point halftime lead. Murray scored 15 points to go along with four assists, three rebounds, and two steals in the opening 24 minutes.

Overall, Murray finished with 18 points, seven assists, and six rebounds. He is really coming into his own and doing so at the right time.

Settling in his new role

After missing six games with hip soreness, LaMarcus Aldridge returned to the lineup in Oklahoma City on Wednesday night. However, he came off the bench for the first time since his rookie year. After the game, Coach Pop made it sound like Aldridge would be coming off the bench for a while longer and that was the case on Saturday.

In his second game off the bench, Aldridge scored 21 points to go along with five rebounds while shooting 50 percent from the floor. In both games with the second unit, Aldridge is averaging 16 points off the bench. The big question is will Pop stick with LMA in that role once the full team is back from Covid protocol.

“LA was steady,” Popovich said. “Took advantage of all the situations he was put in and did a heck of a job for us.”

The Spurs are now 16-12 on the season and will continue their homestand on Monday night against Kevin Durant and the Brooklyn Nets (22-12) at 7:30 p.m. at the AT&T Center.