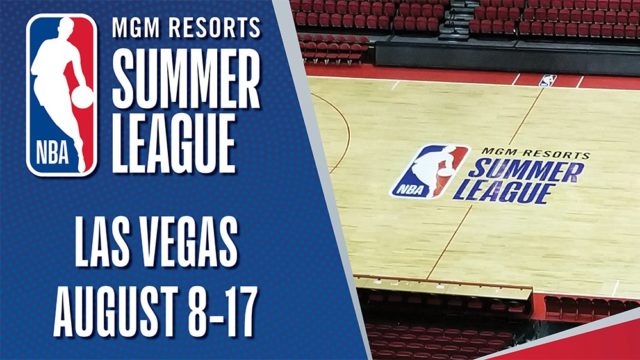 Sunday the San Antonio Spurs released the Summer League roster for their team that will participate in the Salt Lake City Summer League,= and then the Las Vegas Summer League. 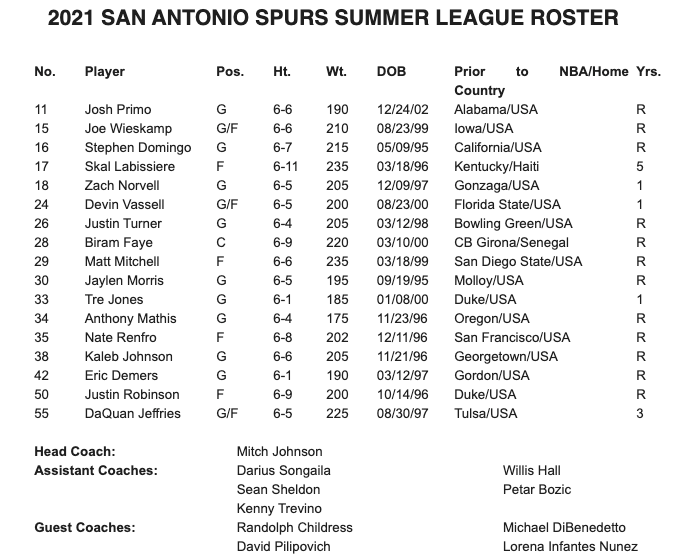 The team will be coached by Spurs assistant coach Mitch Johnson.

Here are some notable players on the roster.

Devin Vassell – Vassell was one of the rare rookies for the Spurs last season who ended up being part of the rotation off the bench. While he was mainly a spot-up shooter in his rookie season on offense, and really helped the team off-the-ball on defense, it’ll be interesting to see if the coaching staff expands his role in these Summer League games.

Tre Jones – Jones played spot minutes last season when a game was already decided. This could be a big Summer League for him since Patty Mills is an unrestricted free agent. If Mills signs elsewhere, Jones could be the Spurs’ backup point guard on opening night.

“They didn’t get Summer League,” said Coach Mitch Johnson of Vassell, Jones, and all NBA rookies last season because of the unusual circumstances.

“We take time to develop our rookies and not have to throw them in the fire,” said Coach Johnson of the Spurs’ unusual path with rookies, but, for Vassell, he had to play in the rotation early on last season.

Joshua Primo – The Spurs recently drafted Primo with the 12th pick in the NBA Draft Thursday. While selecting Primo so early was surprising, there’s been reporting that other teams had their eye on him and might have selected him as early as 16th. He’ll get his first shot against NBA competition in these Summer League games.

Joe Wieskamp – Wieskamp was also recently drafted by the Spurs Thursday with the 41st pick in the second round. Unlike Primo, he’s not on a rookie scale contract, so if the Spurs don’t initially sign him, this could be a chance for him to show the franchise he should get a full NBA deal like Jones last season, or the Spurs could decide to sign him to a two-way contract.

Like Primo, this is Wieskamp’s chance to show how he’ll fare against NBA competition. He’s already bringing a much needed skillset to the team with his outside shooting.

“It’s their first time to get their feet wet and play in an NBA game,” said Coach Johnson of Primo and Wieskamp.

“He’s an older rookie than we’ve had,” said Coach Johnson of Wieskamp. “He can really think when he’s out there on the fly. He can really make some improvisations. I think he will fit in nicely.”

“Great shooter,” said Primo of Wieskamp, “he can get his feet set really quickly and he can make the right play.”

“I’m super excited to be here,” said Wieskamp of joining the Spurs. “This coaching staff, this support staff is perfect for me.”

Wieskamp said “coming off screens, coming off dribble handoffs,” is an area of the NBA game where he thinks he can bring forth his shooting skills.

DaQuan Jeffries – The Spurs claimed Jeffries off the waiver list late last season. It was so late in the season he didn’t even get to get on the floor. He has a team option the Spurs need to decide on today, or if they don’t exercise the option, they can make him a restricted free agent. Jeffries’ best skill will be providing outside shooting to the team.

Other players – The front office wants to add some more size this offseason in the frontcourt. This could be a good opportunity for some of the big men on this roster like Skal Labissiere (6’11”), Biram Faye (6’9″), and Justin Robinson (6’9″) to try to earn a roster spot or possibly a two-way spot. Robinson is the son of Spurs legend and Hall of Famer David Robinson.

The Spurs will first participate in the Salt Lake City Summer League beginning Tuesday. (Schedule via the Spurs)

From there they’ll travel to Las Vegas. Here’s the Vegas schedule also via the Spurs.