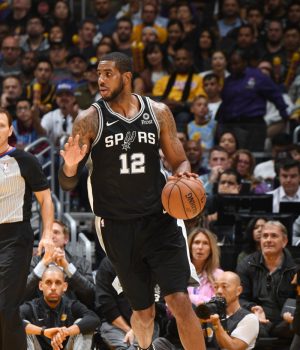 The San Antonio Spurs closed out their two-game road trip by rallying for a 143-142 win over the Los Angeles Lakers (0-3) at the Staples Center on Monday night.

The victory is the first road win for San Antonio since February 25 against the Cleveland Cavaliers and sees the Spurs bounce back from a loss in Portland on Saturday night.

San Antonio rallied from a six-point deficit in the final minute as Patty Mills’ game-winner was the difference.

“That was the best part of the game,” Spurs coach Gregg Popovich said. “We were down six and the guys kept playing. It bodes well for the future as they continue to play together.”

Here is what went good and bad for the Spurs, as well as three standout players: LaMarcus Aldridge, DeMar DeRozan, and Bryn Forbes.

After two games of poor shooting, LaMarcus Aldridge finally found his shot in Hollywood and he found it in a big way.

Aldridge finished the game with 37 points on 13-of-22 shooting to go along with 10 rebounds. Fans at the Staples Center were treated to the LMA that Spurs fans saw a year ago, putting the team on his back and willing them to victory.

The forward scored eight straight points for the Spurs in the fourth quarter, including two free throws after fouling out JaVale McGee.

“You can never count yourself out until it’s over,” Aldridge said. “We made shots and they made shots but we grinded down the stretch and guys made big shots.”

If any fans are still wondering if DeRozan can fit in the Spurs system, Monday’s game should be the answer they were seeking.

DeRozan scored 37 points and dished out a career-best 14 assists in the win. He and Aldridge continue to work well together and DeRozan found Rudy Gay for a big corner three-pointer in the fourth quarter.

“We made the game harder on ourselves,” DeRozan said. “We wanted to buckle down and stay disciplined going into overtime. And we did.”

The Spurs still continue to get solid contributions from Forbes on the offensive end of the ball as he displays more confidence with each passing game.

Forbes had 16 points and went 4-of-8 from three-point range and finished 6-of-14 overall. While guards like Forbes and Mills may be undersized, they provide a much-needed scoring boost for the Spurs.

“They bring scoring,” Aldridge said of the guards. “When they score like that, it makes it harder for teams to double team.”

The Spurs are now 2-1 on the season and will return to the court on Wednesday when they welcome the Indiana Pacers (2-2) to the AT&T Center at 7:30pm Central Time.