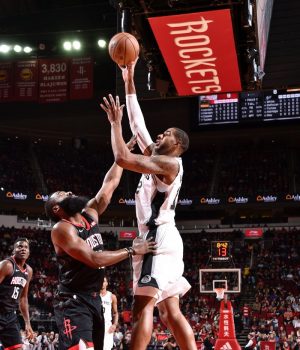 The San Antonio Spurs’ rally came up just short as they fell 108-101 to the Houston Rockets (17-15) at the Toyota Center on Saturday night.

The loss snaps two different streaks for the Silver and Black, the first being their three-game winning streak and the second saw San Antonio allow an opponent to score 100-plus points for the first time in seven games.

“We hung in and got it tied up,” Spurs head coach Gregg Popovich said. “We gave up a couple of offensive boards but we hung in tough. I was really proud of them.”

San Antonio went down 17 points as they gave up 43 points to Houston in the third quarter. The Rockets outscored the Spurs 43-26 in the third and opened the second half on a 12-0 run.

James Harden led the Rockets with 39 points but shot just 35 percent from the field to get those points. Houston big man Clint Capela had a monster of a game with 21 points and 15 boards for the Rockets, who snapped a losing streak of their own.

The Rockets finished the game 19-for-54 from three-point range and outrebounded the Spurs 58-43, with 19 of those on the offensive end.

San Antonio was led by DeMar DeRozan‘s 28 points and eight assists. LaMarcus Aldridge added 18 points and six rebounds, while Bryn Forbes added 12 for the Spurs, who finished off a stretch of three games in four nights.

“We gave them a cushion,” Aldridge said. “They held on to it but we stuck with it. We made a run late but it was not enough.”

The Spurs are now 18-16 on the season and will have a few days off for the Christmas break before returning to the court on Wednesday to face the Denver Nuggets (21-10) at the AT&T Center.