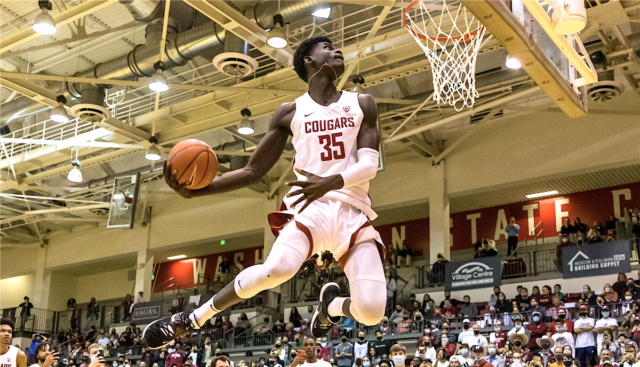 The San Antonio Spurs have begun their season in earnest with some tough games to start the schedule. While this may not be a complete indicator of what to expect from this season as far as the draft goes, there are still plenty of potential draft sleeper prospects to watch.

Below are three such players you should be keeping tabs on as they might be available in the early parts of the second round, but could be a first-round talent. And spoiler, they are all forwards or big men so you can rest assured I am not trying to replace any of the guards who have been playing well to start this season for the San Antonio Spurs.

The 6-foot-11, 210-pound big man out of California is an under-the-radar prospect as he re-classified and went to Washington State a year early. He played for Prolific Prep and didn’t get a whole lot of shine, but that doesn’t mean he doesn’t have skills.

Gueye is a fluid, smooth, and long athlete. He has the makings to be a stretch center with good mechanics on his shot and a release that few defenders could contest. He can handle the ball a little bit but has to improve on that and his consistency. However, he should have plenty of opportunities to do that at Wazzu as he has the potential to be a one-and-done.

The 6-foot-8, 215-pound forward out of St. John’s really turned it on in his sophomore season. He had the chance to go pro but was likely a late second-rounder. With another year of Big East ball under his belt and being the go-to guy again for the Red Storm, Champagnie could make the case as a legitimate first-round pick.

He averaged nearly 20 points a game to go with 7.4 rebounds, a block, and 1.4 steals per game. He shot 38% on his threes for the season while shooting 43.3% overall. That overall shooting percentage might be a bit low, but he was the focus of the offense for SJU often throughout the season.

He will have to improve his passing, on-ball defense, and scoring in traffic if he wants to make some real noise though. He is good from beyond the arc and in the mid-range, but getting a little stronger should help him when he gets into traffic.

The 7-foot, 242-pound Duke sophomore was underwhelming in his freshman season, but there was a lot of team turmoil that didn’t help him either. He’s no longer playing behind Jalen Johnson, knows his role, and will be able to play it well. He ended the season scoring in double digits in five of six games, including four straight.

He is purely a defender and garbage man right now in how he gets his buckets. Lots of clean-up duty and cleans the glass well. He will absolutely have to extend his range if he wants to become more than a Jakob Poeltl-lite. He can be a bit heavy-footed at times too, but he has the frame to get stronger and can work on his speed this season.