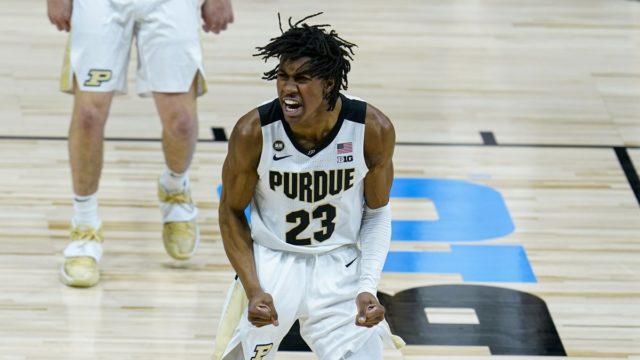 The San Antonio Spurs are still in contention for a top-6 pick and one player to keep an eye on will be Purdue’s Jaden Ivey. While he is another guard, he would be too good to pass up at the 5th or 6th pick. The sophomore Boilermaker is an athletic marvel and could be an incredible complement to any guard currently on the roster.

The 6-foot-4, 195-pound guard is fast, strong, and has drastically improved his shooting on a much greater volume than his freshman season. He has become the leader of this Purdue team and has been the reason for such a strong start to their season. Here are his stats so far this season (12 games).

Ivey fits the defensive mold that Spurs fans are used to seeing. He gets into passing lanes well and is an absolute menace on-ball defender. He makes life difficult for any ball handler and can guard one through three to boot. He’s also a pretty good rebounder, which is another trait that the Spurs would surely love to have in its backcourt.

Ivey has greatly improved as a playmaker from his freshman season as well, almost doubling his assist numbers. He trusts his teammates, but when it comes to needing a big bucket down the stretch, Ivey doesn’t shy away from the moment. He has no problem taking big shots and he’s become a much more consistent shooter in that regard.

Ivey’s biggest issue is that he is a bit of a tweener. He doesn’t play a true point or shooting guard position. He can do a bit of both and he just makes plays so it’s hard to pass up his kind of versatility at that five or six spots in the draft. He will have to continue to improve his shooting consistency and show that he can stay locked in defensively all game. He does that, and he will be in great shape.