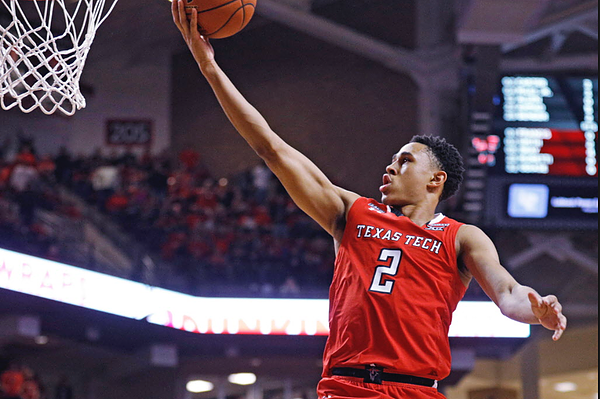 The NBA Draft is right around the corner and that means we are down to the wire with draft prospects taking their last visits and going through their last workouts. This week’s prospect is Zhaire Smith out of Texas Tech.

The 6-foot-5, 195-pound guard was on one of the more oddly constructed teams in the NCAA Tournament as they relied heavily on a lot of guys similar in size to guard every position on the floor and create their own shots. As a freshman, Smith led his team in rebounds and steals and while he only scored about 11 points a game, it was enough to give him 417 points on the season and break a program record for single-season points by a freshman.

Here are some of his stats from the past season:

Smith is an excellent defender and that is definitely what he will be hanging his hat on early in his NBA career. He has a high motor that’s seen get some great putback dunks as well as chase down blocks. He’s quick to move with the offensive man and can body his man because he’s able to beat him to the spot. He also gets off the ground very quickly — helpful for those high motor moments — and gets up pretty high too.

He closes out hard on shooters, fights through screens and battles on switches as well. However, he does have defensive lapses from time to time but is still very young as he just turned 19 in June. He has a lot to learn on the offensive end as he needs more advanced dribbling moves and not just straight line drives. However, he could become a secondary ball handler as he is comfortable with it in his hands.

Smith’s shooting percentage from three-point land (45%) is a bit deceiving as he only attempted 1.1 shots from there a game. He will have to show he can be more consistent from there and be a willing shooter from deep as well. He has solid mechanics, but his release is slow so that will be something to keep an eye on going down the road. However, he would fit right in with the Spurs as a versatile defender who won’t take shots away from anyone.

For more on the draft, look for our official Spurs Draft Guide coming out next week in a digital magazine format. It will be available for $5, but Project Spurs Members will receive it for free along with the other perks involved with being a member.