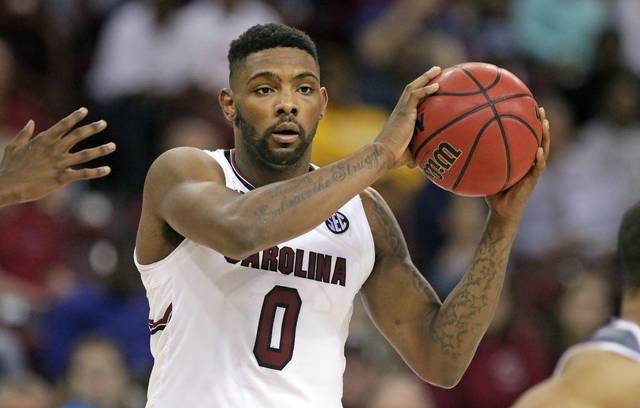 The San Antonio Spurs are in a tight fight with the Houston Rockets in the second round of the NBA Playoffs and while most of the games aside from Game 5 have been pretty lopsided one way or the other, there’s still something to get excited about. The NBA Draft is right around the corner and the draft lottery is even closer. Of course, the Spurs won’t have to worry about getting a top pick. They are guaranteed to appear near the bottom of the first round thanks to their inability to miss the playoffs.

So that brings us to this week’s Spurs Prospect Watch featuring Sindarius Thornwell from South Carolina. He’s a good defensive guard that could fall to the Spurs in the second round. Here are some of his measurables:

His defense would be a huge plus, especially if he ended up running with the second unit. His athleticism and knack for grabbing a ton of boards as a guard shouldn’t be overlooked and is the best kind of thorn in the side as an on-ball defender. He also led the conference in steals so that’s not too shabby.

He was also able to score in bunches and a lot of that was because he was able to get to the free throw line at-will as he led the SEC in free throws attempted and made. He’s a solid scorer from everywhere on the floor and showed a vast improvement in his shooting from beyond the arc as he brought that up by six percentage points from the 2015-16 season.

He’s also a solid option in the post if he ever gets a smaller defender on him as he can score easily there or get to the line with one of his moves that will undoubtedly get a defender in the air.

The craziest part about Thornwell’s senior season is that not only was he named the conference’s Player of the Year, but he did while throwing up an absurd 29.5% usage rate. Usually guys who use that many of the team’s possessions are horribly inefficient and have awful shooting percentages.

Thornwell was the exact opposite. He had a conference-leading 30.3 Player Efficiency Rating, which was also good for ninth in the nation for players who averaged 25 minutes a game or more.

Thornwell would be more than worth a second round pick and could make the Spurs front office happy if he is able to show that his shooting will translate to the pros. The physical, defensive and athletic tools are there. He just has to show he can be decent to good on offense and he should be pretty set.