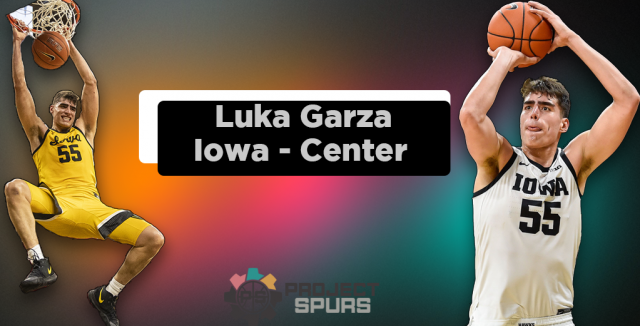 The San Antonio Spurs have been uneven at times this season and it remains to be seen if they can make the playoffs. However, this next prospect might be able to slip to the second round for the Spurs.

Iowa super senior Luka Garza stands at 6-foot-11 and 265 pounds. He has extended his range and improved his game on his way to becoming a Naismith Player of the Year candidate. He can do just about everything, albeit at a bit slower pace. Here are some of his stats through 16 games so far this season.

Garza was in the discussion for the National Player of the Year last season and could win it this year. He was the Big Ten MVP last season and he has gotten even better this season. He has started to expand his range, which has helped his draft stock and has shown even more low post moves in his arsenal. That’s just the beginning of what makes him such a desirable prospect.

He finds ways to score around the rim with great touch and despite not being particularly athletic. He’s got some Kevin McHale to his game in regards to being able to make a multitude of moves and finish them.

He’s able to shoot in the mid-range (surely something the Spurs will love), but he won’t be taking anyone off the dribble. He definitely lacks the speed to be a driver or initiator on offense but can have the offense run through him.

Garza won’t be a versatile defender in the NBA, but he should be fine on traditional big men. He walls up well and has long arms that help him protect the rim. This makes up a little bit for his lack of speed and mobility elsewhere on the floor. He’s a solid help defender and a smart player who could be net wash defensively at worst.

The shooting has vastly improved for Garza and that is going to help an offense space out as he has to be respected on the perimeter. However, his best offense comes inside the paint as mentioned earlier and that’s how he will get early playing time in the NBA.

Garza is likely a late first-round or early second-round pick as things stand now. And that lines up with how the Spurs are currently playing as they are a solid playoff team. They would definitely be picking outside of the lottery if the draft were held today.