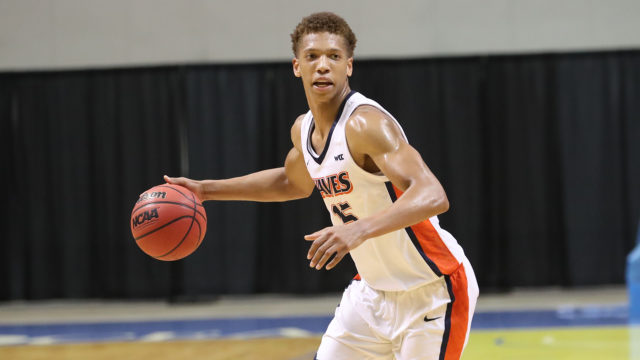 The San Antonio Spurs could use some more versatile forwards in their rotations. One prospect who could fit that bill is Pepperdine junior Kessler Edwards. The 6-foot-8, 225-pound forward is a solid two-way player who could be a nice little steal in the second round of the draft.

If Edwards played at a Power Six school and put up the numbers he has this season, he would be getting a lot more attention. However, playing at Pepperdine hasn’t afforded him a lot of national attention and that might work out for him in the end. He’ll slide into the second round, but he could get some spot minutes right away for a team after he puts on some weight. Here are his stats from the previous season.

While Edwards has a bit of a funky hitch in his shot (mostly in the legs), it hasn’t hindered him from being an excellent shooter. As you can tell from his averages above (on 4.4 three-point attempts a game), he is a reliable shooter. And he becomes even better inside the perimeter thanks to his post game and automatic mid-range jumper.

Edwards was able to guard multiple positions at a high level this past season. He moves his feet well, gets into a good position, and he hung with the bigger post players at times. He won’t be asked to do that in the NBA, since he will likely be stuck guarding wings and power forwards with the occasional small ball center in the mix.

The Pepperdine junior should see himself develop into a nice 3&D player with potential for some shot creation on his own. He could be a guy who sneaks into the rotation early, but he will have to prove he is ready to play with some tougher competition.