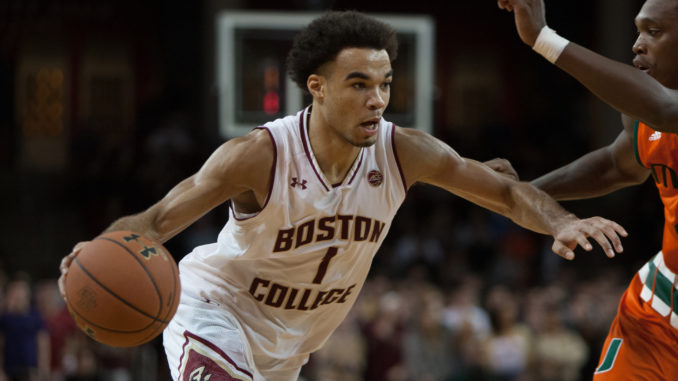 The NBA Draft has come sooner than we all expected, especially in light of the Kawhi Leonard news. However, we must soldier on and take a look at potential draftees that could be available at pick 18 tonight. The subject of this particular prospect watch is Boston College’s Jerome Robinson.

The 6-foot-6, 191-pound guard out of North Carolina can fill up the scoreboard and was part of a two-man wrecking crew for the Eagles along with Ky Bowman. The two averaged over 38 points combined a game and Robinson only failed to reach double-digit scoring three times over his 35-game season.

Here are some his stats for the past year:

You can see that Robinson is a highly efficient shooter and he’s a good shooter from all over the floor. His career-high of 46 points came this past season and it only took him 23 shots to get there (with 15 of those being of the “made shots” variety). He was the second-leading scorer in the Atlantic Coast Conference and had a true shooting percentage over 60 percent — a stat that takes into account the point differential between certain shots.

Robinson is capable of attacking a hard close out and getting to the rim and to the free throw line where he will finish more often than not. He’s always a threat to shoot the ball, which NBA teams love for spacing reasons, and is a solid athlete to boot. He has the size to play either guard position and he’s a decent enough defender for now.

Robinson will definitely have to improve a couple of things on defense, but he has the size and length to be solid there to start. He doesn’t get as many steals or blocks as you might like to see, but he does have the speed and quickness to defend point guards at the next level. Once his decision making process improves he can be a pretty good defender for the Spurs.