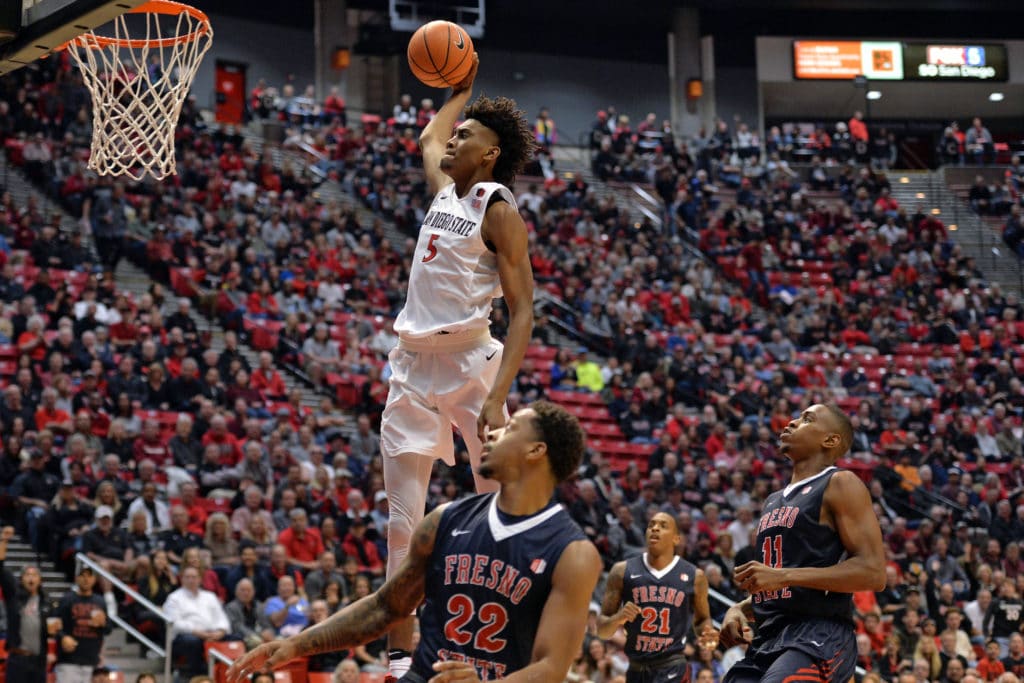 There was some doubt as to whether the Spurs could pull out of their bad funk to start the season. It looks like those doubts can be put aside as the team is now firmly in the playoff picture with a 24-17 record after the win over the Detroit Pistons.

The offense has been steady while the defense has finally picked up the last month or so. This has led to a lower projected pick in this year’s NBA Draft and that brings us to this week’s prospect to watch.

San Diego State big man Jalen McDaniels is projected as a late first-rounder or early second-rounder right now. That could mean the Spurs grab him with their pick from the Toronto Raptors — projected at 30 right now — if not their pick about 10 slots before that. The 6-foot-10, 195-pound forward has shown improvement from his freshman season and some flashes of what he might do in the NBA. Here are his stats so you have a baseline of what to expect from him:

The first thing that sticks out about McDaniels is his slight build, which will have to be fixed if he wants to last in the league. With his lack of weight comes a possible position change for him. He plays center for SDSU now, but would likely become a power forward at the next level and have to improve his shooting a bit to do so.

He already has the athleticism to create mismatches at the position and has a good enough handle to get by the kind of defenders he’ll see in the NBA.

While his long-range shooting numbers aren’t ideal right now, he has shown flashes of his jump shooting developing and could become a stretch-four if that pans out. He won’t be making a huge offensive impact on the game until his shot progresses, but he can still get a lot done defensively. He has the length to alter and bother shots, he has a great motor and is a solid defensive rebounder.

Outside of needing to get stronger, McDaniels will have to show more focus on the offensive end by cutting down on turnovers and getting back to his freshman year shooting levels. He was over 55% from the field and over 75% from the charity stripe. Should he become more consistent shooting the ball and be more aggressive on offense, he could be a great flier pick with lots of potential upside. The stuff of NBA dreams nowadays.