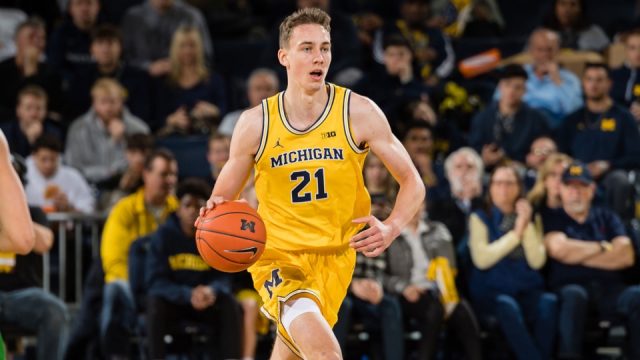 The San Antonio Spurs are in a heated race for a playoff seed right now and so it remains to be seen when they might be picking. However, a good option in the post-lottery world is Michigan Wolverines forward Franz Wagner. The 6-foot-9 and 220-pound sophomore came back to Michigan to put on some weight and work on his game. It’s safe to say it paid off.

While Wagner has not drastically improved some of his everyday stats, he has still become a more efficient scorer and player. His PER is up as is his offensive rating, while he’s lowered his defensive rating. And you can see some of that in the stats below through 15 games.

Michigan has become a top tier this year thanks to Juwan Howard’s coaching, but also thanks to Wagner stepping up his game. He has been a more willing driver and has been a much better passer and ball-handler this season. He’s cut down on his already low turnover numbers and has significantly improved his playmaking. This has led to his assists numbers being much higher.

Last season showed that Wagner had to make some major strides on defense and he has absolutely done that. He doesn’t give up on guys who get by him on drives and that has led to him doubling his block average from last season. He can now guard two or three positions at a solid level, but will likely end up guarding either forward position at the next level.

Wagner will have to become a more willing and consistent three-point shooter at the next level, but his numbers and mechanics suggest that it’s certainly possible.

He’s played shooting guard and both forward positions for the Wolverines so he has some experience there as well to make him a more versatile player. He will have to become a stronger driver to get to the rim and draw more fouls, but he will be fine at the line once he starts doing that.

It remains to be seen where exactly Wagner might end up in the draft, but he could go as high as the later part of the lottery and fall to the end of the first round. Of course, that’s dependent on team needs and how strongly he will be able to finish out the season. It may also depend on how many more games he will be able to play as I would not assume that the NCAA Tournament is guaranteed despite the NCAA wanting it to happen.

Visit our 2021 Profiles page for a look at all the players we have profiled this season.