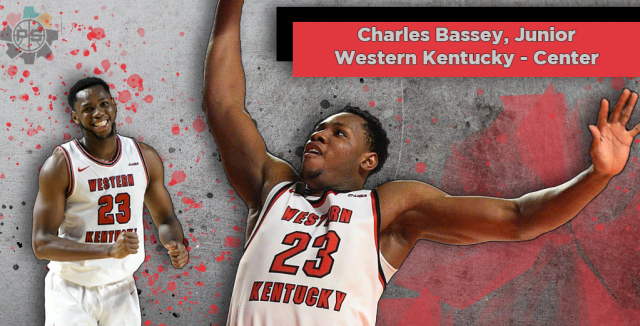 The San Antonio Spurs are hovering around .500 to start the season. If they stay there for the season they can expect to be picking just outside the lottery. A prospect to keep an eye on (again) this year is Western Kentucky’s Charles Bassey.

The 6-foot-11, 235-pound big man has been on our radar for a couple of years now. An injury last year kept him to only 10 games and out of the draft. However, he’s already gotten off to a hot start in the 16 games he’s played so far. Here are his stats in those games.

Bassey would be an excellent fit for this Spurs team in desperate need of rebounding and some defensive energy in the frontcourt. He regularly chases after rebounds that are out of his area and does so despite being boxed out. That’s how he averages over three offensive rebounds a game!

He has some work to do in the low post but does have some basic go-to moves he can use on defenders. He’s a good pick-and-roll player though with good hands. He knows when to slip the screen and when to set it for a good roll. He always finishes strong at the rim and doesn’t have any problems dunking it when possible.

As a defender, Bassey is a great rim protector and has been phenomenal this season with over three blocks per game. He has excellent timing on his blocks, doesn’t often fall for pump fakes, and closes out well on the perimeter.

Bassey contests tightly without fouling and switches smoothly onto smaller players. He could use some help on post defense, but really does all the other things you like to see in a switchable big.

While the defense is absolutely there, the big man will have to work on his shot as there are some mechanical issues with it right now.

It looks similar to Giannis Antetokounmpo’s form right now and that is not going to be sustainable. Bassey should be available in the first round right after the lottery and I don’t think it’s a stretch for the Spurs to grab him around picks 15-19.