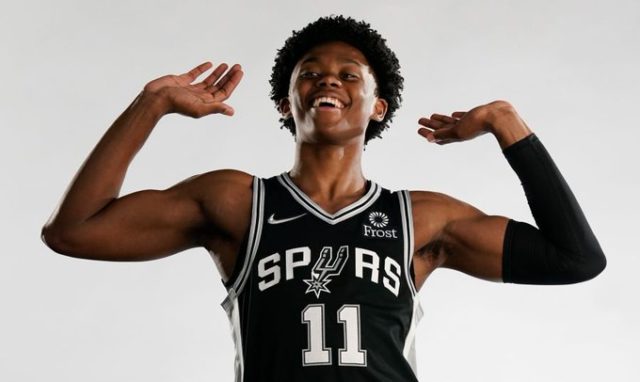 The San Antonio Spurs played their first preseason game of the 2021-22 campaign on Monday night, coming away with a 111-85 win against the Utah Jazz.

For many, aside from getting a first look at the new-look Spurs, they also got to see Spurs rookie Joshua Primo in his first non-summer League game action.

While it is very early, and I’m not anywhere close to being in the “start Primo” camp, here are a few takeaways after his first game.

Poise as the ball-handler

One of the few negatives that came from Primo’s summer league play was his handle. Primo played mostly off the ball at Alabama, but the Spurs utilized him as a ball-handling distributor this Summer. The transition wasn’t the easiest one and Primo got his pocket picked on a few occasions as he attempted to navigate around screens.

Monday night painted a different picture. Primo looked comfortable with the ball in his hands and showed poise greater than that of his age. Having a 6-7 shooter that can also reliably handle the ball could be quite a benefit. As he showed on Monday, he can use the screen to drive past defenders, and in space, he can easily pull up and knock down jumpers.

Having a player who is not accustomed to chasing speedy point guards around the floor is going to be a challenge at times, and Primo will occasionally get beat off the dribble defending said point guards.

With that said, the one part of Primo’s defense that was impressive was his recovery after getting screened. On several occasions, Primo was screened by a big to free up a driver. The rookie showed his ability to get back into frame, recover and get into position to defend the layup or shot attempt. That same skill will allow him to go after the chasedown block as well.

Out of college, Primo was known most notably as a spot-up shooter and knocking down open shots. While he can certainly knock down open shots, he also showed that he doesn’t need much space to score. He’s also not afraid to let the ball go, and a short memory is paramount to a shooter’s success. He pulls up with confidence but also plays within the offense.

Primo had some rookie debut, finishing with 17 points in 18 minutes on 7-for-8 shooting from the field. He won’t do that every game, but there are certain patterns that are starting to develop that will be worth keeping an eye on as the preseason progresses.

“My teammates just made sure that I was confident going out there and the fans made it easy,” Primo said after the game. “I think it was just a great game for all of us to get our rhythm so it was fun.”

Primo and the Spurs will be back in action tonight on the road against the Detroit Pistons.