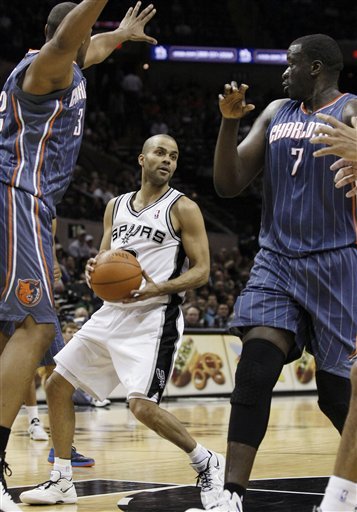 Four quarters later, the Spurs got back on the winning side at the AT&T Center by cruising to a 102-72 blowout win over the Charlotte Bobcats sans Ginobili

The Bobcats went on a 7-2 run to start the first quarter, but the Spurs fired back with a Richard Jefferson three-pointer and a layup by DeJuan Blair to even the score. The remainder of the quarter would be a duel between Les Bleus teammates Boris Diaw and Tony Parker.

Diaw lead all scorers with 9 points while Parker lead the Spurs on a 17-4 run to finish the first quarter.

The Bobcats fought back in the second quarter while the Spurs were plagued with turnovers (7). Gerald Henderson, who was 0-5 in the first quarter, started knocking down shots and rookie Kemba Walker pitched in for a struggling D.J. Augustin, but the Bobcats were still down 10 points entering halftime.

“I thought we played very well in the first half. We just didn’t make shots,” Bobcats coach Paul Silas said. “We rebounded, we defended and they turned the ball over and I thought when Najera came in, he helped us out a lot. In the second half, it just went back to the way it’s been and we didn’t play well.”

While Henderson continued to heat up, and Corey Maggette scored on several drives to the basket in the third quarter, the Spurs blew it wide open with a Duncan layup pushing the margin to 17 points.

The Spurs’ balanced scoring began to wear on the Bobcats as every Spur who played in the third quarter, minus DeJuan Blair, found the basket.

“We’ve got a very unselfish group. They know that if the ball moves we’re a much better basketball team,” Spurs coach Gregg Popovich said. ” We’re the kind of team that’s not like ‘give the ball to this guy and he’s going to score’. We’re not built that way. We have to win as a group and they know that, so they move the ball well.”

The Spurs wouldn’t look back. They looked to their second unit to keep the pace as the lead grew beyond 20 points on a 14-4 run. Kawhi Leonard, Matt Bonner and T.J. Ford paced the Spurs throughout the quarter and limited the Bobcats to just 33 percent shooting from the field.

“They just did a great job of moving the ball around and they made shots,” Walker said.

The Spurs lead the Bobcats in just about every category as they shot at a 50 percent clip beyond the arch compared to Charlotte’s 18 percent. They also hit the glass for 18 more rebounds (55).

Parker lead all scorers with 15 points along with four assists and three steals. Parker was one of five Spurs players in double figures. Diaw and Maggette lead the Bobcats with 14 points apiece.

“Everybody was sharing,” Parker said. “In the first half we could’ve played better, we had a few turnovers, but in the second half we played a lot better.”

With the win, the Spurs are now 25-11 and 14-2 at home. They’ll put their home record to the test again on Sunday night against the Denver Nuggets, which will likely be Ginobili’s first game back.

“One more guy. The most important,” Parker said about Ginobili’s return. “I can’t wait.”

• The bench contributed 51 of the Spurs’ 102 points, lead by Bonner (14) and Leonard (10).
• The Spurs’ 30-point win margin is the largest of the season.
• After being held scoreless in his return on Wednesday, T.J. Ford saw a slight increase in minutes and finished with seven points and three assists.