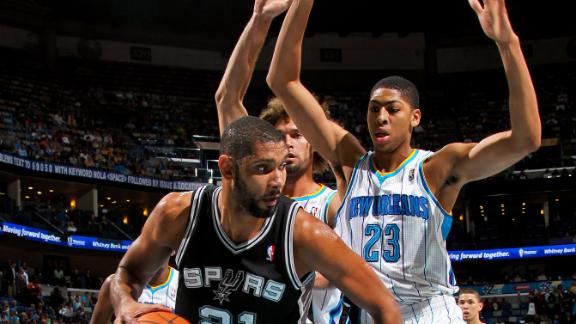 Wednesday night in New Orleans wasn’t exactly scripted as planned. The San Antonio Spurs, who finished with the best record in the Western Conference last season and had their entire team back, struggled against the number one overall pick Anthony Davis and the New Orleans Hornets Wednesday, however by the end of the night, the ending result was similar to the original script.

Davis impressed in his rookie debut with 21 points and nine rebounds, but the two Spurs leaders in Tim Duncan (24 points, 11 rebounds, three blocks) and Tony Parker (23 points, six assists), did what they needed to do throughout the game to make sure their team held onto the 99-95 victory, especially Parker in the final minute as he made a 3-pointer that gave the Spurs the lead in the fourth quarter.

Kawhi Leonard started his sophomore season off with a bang, 19 points, seven rebounds, and five steals, while Hornets guard Greivis Vasquez dished his way to 13 assists on the night.

Player of the quarter: Parker and Duncan scored 10 points apiece in a variety of ways in the first. Duncan began the game with a slam dunk in the pick-and-roll, while Parker scored with tear drops and jump shots. The two combined for 20 points by the end of the first, but the rest of the team struggled to score just eight points. The Spurs’ defense allowed the Hornets to score 31 points. The Hornets’ front court specifically scored 19 of the teams 31 points.

Player of the quarter: Parker seemed like the only productive player in the second quarter as he added five more points and had three assists by halftime. The Spurs’ defense continued to struggle as they allowed the Hornets to shoot 53% in the first half. The Hornets’ defense held the Spurs to just 15 points in the second quarter.

Play of the quarter: With the end of quarter winding down, Parker penetrated into the lane and found an open Matt Bonner for a 3-point basket before the half. Bonner’s made basket helped the Spurs go into halftime trailing by only single digits.

Player of the quarter: Early in the third, Leonard began a 7-0 run that helped the Spurs reclaim the lead after being down 11 points in the second quarter. Leonard scored nine straight points to help the Spurs take a seven point lead at one point.  By the end of the quarter, Leonard had scored 16 points and stole the ball five times.

Play of the quarter: On several aggressive defensive plays in the third, Leonard made loose ball steals either by picking the ball from the man he was guarding or with his help defense. He turned those steals into points on the other end in transition.

Player of the quarter: Duncan and Parker used their veteran leadership to lead by example as they continued to deliver on offense every time the Hornets found a way to answer back. With Manu Ginobili not playing in the game, Parker and Duncan were productive leaders and Leonard stepped in to provide some offense for the team as it desperately needed some scoring during some stretches.

The Spurs (1-0) will fly back to San Antonio where they will host the Oklahoma City Thunder on Thursday in a back-to-back home opener at the AT&T Center.

·         Even with Ginobili out, DeJuan Blair, Cory Joseph, and Nando De Colo all saw no floor time on Wednesday. It’ll be interesting to see if head coach Gregg Popovich elects to use them on Thursday’s back-to-back game.

·         In the first half, the Spurs used a small ball lineup that featured Parker as the point guard and Gary Neal as the shooting guard.

·         In the second half, when Parker went to the bench, the Spurs used another small ball lineup with Patty Mills as the point guard and Neal as the shooting guard. Though they didn’t show their scoring ability on Wednesday, the two guards have shown in the past that they have the capability to light up the scoreboard; however they may pose to be a liability on defense when playing together.