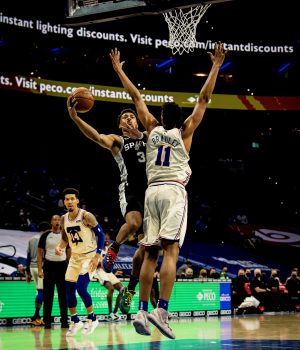 San Antonio played without DeMar DeRozan, who missed his second straight game following the death of his father. Meanwhile, LaMarcus Aldridge is no longer with the team as the Spurs seek a trade partner or will buyout the remainder of his contract.

The 76ers played without All-Star Joel Embiid, who missed the game with a bone bruise in his left knee.

The Spurs kept the game close but Philadelphia blew the game open with a 46-21 third quarter. Spurs coach Gregg Popovich pulled his starters and put his bench players in late in the third quarter.

Despite not having Embiid, there was no issue for the 76ers offense, which lit up the Spurs for 132 points. Tobias Harris led the way for Philadelphia with 36 points on 55 percent shooting while Seth Curry and Ben Simmons combined for 50 points in the victory.

Without DeRozan, the Spurs struggled to find any sort of rhythm on offense. Derrick White led the way for the Silver and Black with 17 points, 15 of those came in the first half. Dejounte Murray added 14 points and six rebounds but no other starter would be in double figures.

Lonnie Walker IV came off the bench to score 15 points while Drew Eubanks had a career-best 17 points and nine rebounds.

The Spurs are now 19-16 on the season and will return to the court on Monday night when they face the Chicago Bulls at 7 p.m. at the United Center.