As summer comes to a close, the San Antonio Spurs refuse to abide by any sort of vacation from the news cycle.

Here are all the headlines you may have missed.

We alluded to this back in May in the midst of the Kawhi Leonard saga, but now it’s official.

Jeremy Castleberry, who was working for the Spurs as an assistant video coordinator, has joined the new look Toronto Raptors coaching staff.

Prior to taking the job with Toronto, Castleberry was briefly interviewed by San Diego State for an assistant coaching position, but ultimately decided to remain at the NBA level.

The move is a no brainer for Toronto as they look to retain Leonard after this season at all costs. And it looks like Castleberry has already traded in his silver and black for Raptors red.

Castleberry will not receive anything similar to a Jackpot bonus for joining the Raptors, but the welcome wagon will likely be rolled out if he can help retain Leonard.

The Woj Bomb that drove the internet into a frenzy on Wednesday was the report by ESPN that Manu Ginobili is seriously considering retirement.

While the worry for most Spurs fans has been Ginobili’s reluctance to announce a decision, he’s also still under contract which would mean any announcement coming from him would more than likely be retirement.

From the ESPN report, Ginobili is finally back from vacation and has been working out at the Spurs practice facility on a regular basis.

He plans to meet with Popovich about his future soon as Pop returns from the NBA’s Basketball Without Borders initiative in Belgrade.

As the NBA transitions into all 30 organizations having a jersey advertisement, the Spurs announced that they have entered a multi-year partnership with Frost Bank.

While the sponsorship with Frost Bank isn’t what most fans wanted, the partnership has a huge historical significance.

When the then Texas Chaparrals needed to secure financing to relocate to San Antonio, it was Tom C. Frost who provided the necessary investment to complete the relocation.

Check out the ‘new’ look jerseys below: 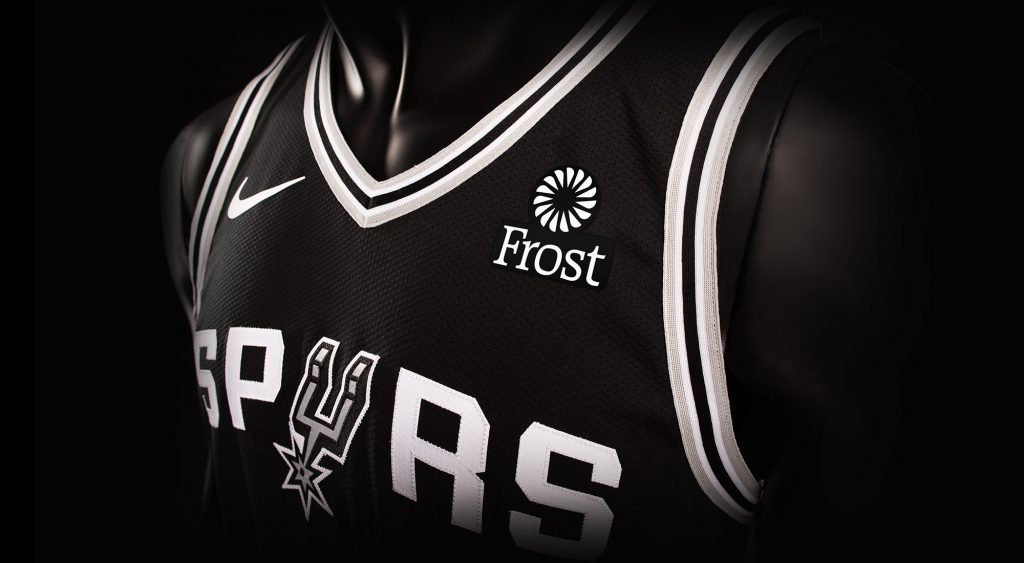