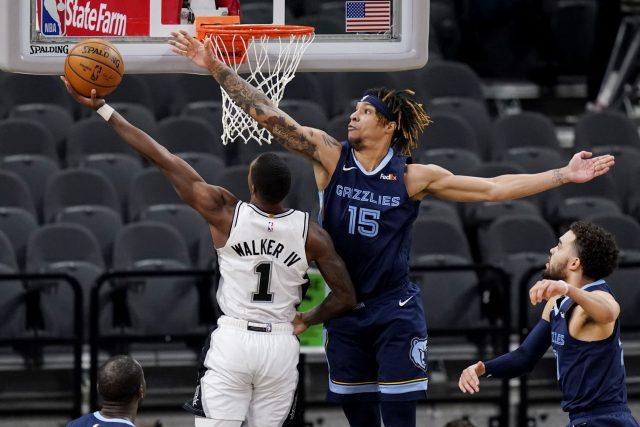 SAN ANTONIO — The San Antonio Spurs concluded their season series with the Memphis Grizzlies, falling 133-101 at the AT&T Center on Monday night.

The loss is the second straight for San Antonio, who dropped to 10th place in the Western Conference.

“Give a lot of credit to Memphis. Both games, they were just tougher in so many ways than we were,” Spurs coach Gregg Popovich said. “Their physicality on defense, their execution on offense.”

Gorgui Dieng scored 19 points and Brandon Clarke had 18 for Memphis, who won two of the three games against San Antonio this season.

Kyle Anderson and De’Anthony Melton added 17 points each as the Grizzlies earned their second straight game after missing action due to the NBA’s COVID-19 protocols.

The Spurs struggled for much of the game, getting outscored 36-22 in the second quarter and 37-19 in the fourth. Keldon Johnson led the team with 25 points and 11 rebounds.

DeMar DeRozan had 14 points and LaMarcus Aldridge scored 12 for San Antonio, who have dropped two straight games. The Spurs had no answer for Memphis defensively, giving up over 60 points in the paint for the second straight outing.

“We were terrible defensively,” DeRozan said. “We couldn’t stop nobody. We never found a rhythm offensively. “They’re a good defensive team in the halfcourt.”

The Spurs are now 11-10 on the season and will return to the court on Wednesday night when they face the Minnesota Timberwolves at 7:30 p.m. at the AT&T Center.