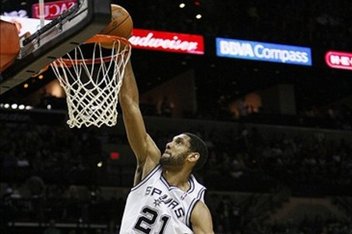 For a first-half recap of tonight's Spurs-Raptors game, click here but here is the second-half recap.

Recap: The Spurs and Raptors continued to have a back-and-forth game with the Spurs holding onto a slim lead. However, with a basket by Amir Johnson, Toronto cut San Antonio's lead down to four (57-53) with four minutes left in the quarter. But once again the Spurs leaned on their defense, led by Kawhi Leonard, to open a 10 point pead on Toronto late in the quarter. The Spurs finally kept the Raptors off the boards closing the gap to 30 a piece.

Recap: Easy does it on both ends of the court was the name of the game in this quarter. The Spurs held the Raptors to "1-and-done" possessions which led the Spurs to a 15-point lead at one point during the quarter. But the Raptors just kept staying in the game and not giving the Spurs a big enough lead to pull the starters. Keeping the Spurs' lead over Toronto was free throws finishing at 82.8% (24-29) from the free throw line

"But, I thought our defense was very good in the second half."  "We got back into our usual flow and it worked out well."

"Danny (Green) and Kawhi (Leonard) worked really hard chasing him while he was out there." (On Spurs' defense on DeMar DeRozan)

"He's always been that way since he's been here. We didn't teach him that." (On Kawhi Leonard's passing lane defense)

"It just took us a little while to get going. We;re going to have times like that, have nights like that." (On shaking off the rust from the Christmas break)

"There were a lot of clips at halftime that Pop showed us. Although we were doing a pretty decent defensively, we upped our pace offensively and got a few more stops and opened it up. (On second half defense)

"Kawhi is creating a lot of turnovers himself. He's getting a lot of steals and turning that into offense." (On Leonard's defense)

"In the second half, we did step up and start to run a little bit more and score better so we got the lead. (On second half defense vs. Raptors)