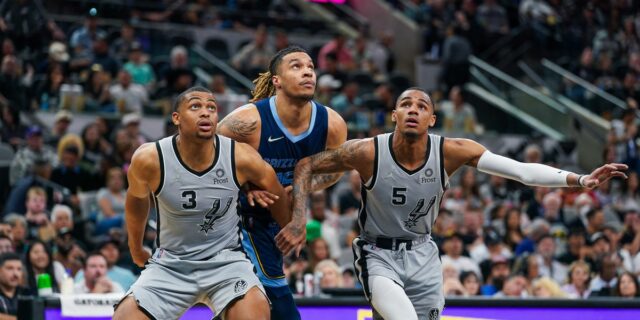 SAN ANTONIO — The San Antonio Spurs lost a heartbreaker to the Memphis Grizzlies at the AT&T Center on Wednesday night, see-sawing out of the final play-in spot in the Western Conference.

“I was really proud of them,” Spurs Head Coach Gregg Popovich said of his team’s effort. “They just have to understand the mental part of the game and the physicality, both the execution and making mistakes, and the physical nature of the competitiveness that’s required. The differences between the first and second halves were pretty obvious.”

Dejounte Murray had 33 points, matching the career-high from Monday night in Houston. Murray added 13 rebounds while Keldon Johnson scored 23 points but missed a lay-in in the final seconds to put San Antonio ahead.

Memphis led by as many as 18 points but the Spurs outscored the Grizzlies 25-19 in the fourth quarter to rally to nearly escaping with the win.

Ja Morant missed his sixth straight game with a sore right knee. Tyus Jones scored 25 points in his absence while Dillon Brooks added 21 points for the Grizzlies, who clinched the second seed in the Western Conference.

”Definitely, a big milestone,” Grizzlies coach Taylor Jenkins said. ”I told the group, a special accomplishment for a special group, but we’ve got more work to do.”

Meanwhile, the Spurs dropped a half-game behind the LA Lakers for the final play-in spot in the West with just a handful of games remaining.

The San Antonio Spurs are now 31-45 on the season and will return to the court on Thursday to face the Portland Trail Blazers at 9 PM from the Moda Center.