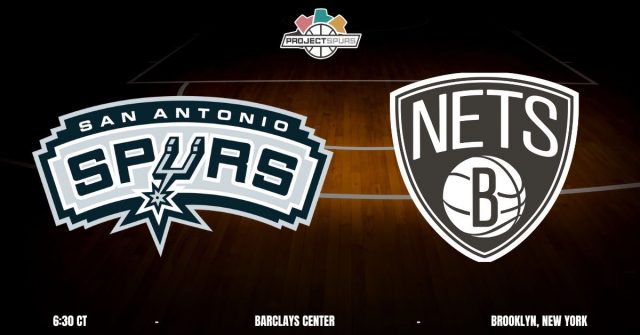 The San Antonio Spurs head to Brooklyn this evening to play against the Nets in the Barclays Center to kick off the new year!

The Spurs are 1-1 in the last two coming off of a razor-close game against the Dallas Mavericks on New Years’ Eve losing 126-125, and a win against New York. The Nets are currently riding on an 11-game win streak.

Devin Vassell will be questionable for this matchup, however, the team was able to have a solid offensive outing last time out in his absence.

How to Stream Spurs vs. Nets

Odds are subject to change and courtesy of BETMGM.

Tonight we have a big matchup between the Spurs and a red-hot Net’s team that currently hasn’t lost in their last 11 outings. Most recently, the Nets have defeated the Charlotte Hornets by a 17-point margin. On the flip side, the Spurs could not find a defensive answer to Luka Doncic in their last outing. Doncic was able to drop a 30-piece in the first half and close the game out with 51 total points.

Let’s see if the Spurs will be able to continue their offensive momentum. Although the team suffered a loss, they were clicking with four of their starters putting up 18+ points. Keldon Johnson led the charge with 30, while Tre Jones was 10 points back with 20. If the Spurs want a big upset here, they will have to find a way to at least slow down Kevin Durant. They can not let the opposing team’s superstar drop 50 the way Doncic did on New Year’s Eve.

The Nets are the heavily favored team in this matchup. So much so that a $900 dollar bet will only return $100 if you bet correctly on a Nets win. And rightfully so, the team hasn’t been stopped in nearly a dozen games. If Kyrie and Durant are able to click tonight, this will be a tough game for the Spurs. A big defensive test lies ahead for Jeremy Sochan and Tre Jones.