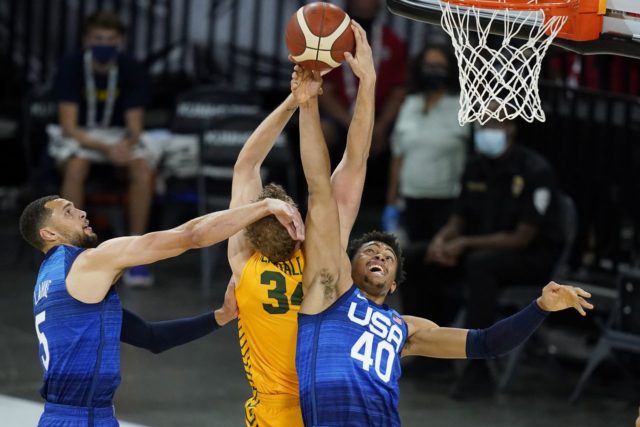 USA Basketball announced Friday Keldon Johnson has been named to the 12-man Team USA roster for the 2020 Olympics in Japan.

According to Adrian Wojnarowski of ESPN earlier Friday, San Antonio Spurs forward Keldon Johnson was going to be promoted to the USA Men’s National Basketball team after Bradley Beal will not be on the team anymore due to health and safety protocols.

Johnson was originally on the Team USA Select team and he was promoted to the National team for this current week until three players from the NBA Finals (Devin Booker, Jrue Holiday, and Khris Middleton) join Team USA.

However, with the news that Beal would be out of the Olympics and also Kevin Love, Johnson was promoted to the 12-man roster and JaVale McGee of the Denver Nuggets was selected to replace Love.

Team USA has gone 1-2 in exhibition play in Las Vegas this past week. Johnson didn’t get any minutes in the opening loss to Nigeria, but then he received 13 minutes in the team’s loss to Australia in the next game. Johnson finished that game with seven points on 3 of 5 shooting.

Friday’s exhibition game between Team USA and Australia has been canceled out of caution after Beal and Jerami Grant entered health and safety protocols. Team USA’s final exhibition game is scheduled to take place Sunday against Spain before the team departs for the Olympics in Japan.