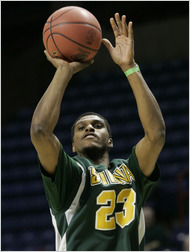 Before the NBA lockout began, the San Antonio Spurs got a look at former Siena guard/forward Edwin Ubiles, according to timesunion.com.

Ubiles, who will be playing with Puerto Rico at the Pan American Games in Mexico, starting today.

He’s already gotten NBA interest with a workout with the San Antonio Spurs in June before the lockout began. “They liked me,” he said. “They told me they weren’t looking to sign me right now with the lockout but I think they thought I was very talented.”

Ubiles said he could be invited to play on the Spurs’ summer-league team next summer, whenever the lockout ends.

Ubiles withdrew from the D-League draft last year due to an injury, but he is eligible to be drafted in this year’s draft early next month.