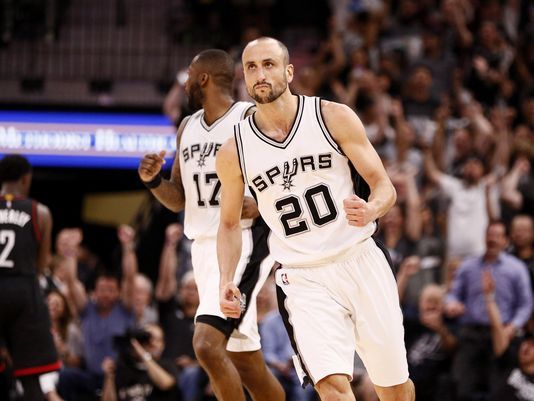 Manu Ginobili went to the rim and threw down a dunk in the second quarter that got his San Antonio Spurs teammates and the AT&T Center jumping out of their seats. That is how you knew it was going to be a special night for the 39-year-old.

Ginobili scored 12 points and had the game-saving block on James Harden in the final seconds to lift the Spurs to a 110-107 win over the Houston Rockets in Game 5 of their Western Conference Semifinals series on Tuesday night.

Kawhi Leonard led the way for the Spurs with 22 points and 15 rebounds, but left in the fourth quarter after suffering an ankle injury. He did not play in the final five minutes of overtime.

LaMarcus Aldridge added 18 points and 14 rebounds, while Danny Green scored 16 points for San Antonio, who took a series lead and can close out the Rockets in Game 6.

”It was frustrating because I wanted to play,” Leonard said of his injury. ”But I was happy seeing my teammates out there putting in a good effort and getting the win.”

Green scored seven of his points in the overtime period, including a go-ahead three for San Antonio.

”I think we all made a decision to be aggressive,” Green said. ”Regardless of what was going to happen. We weren’t going to lose the game being on our heels.”

The Rockets were led by Harden’s 33 points, 10 rebounds and 10 assists. Patrick Beverly added 20 for Houston, who will try to stave off elimination on their home floor.

Player of the game:

Manu Ginobili (no surprise) is Project Spurs’ Player of the Game. His 12 points and key three-pointer sparked the Spurs in the final quarter. But it was his game-saving block on James Harden that saved the night.

Up next: The Spurs lead the best-of-seven series 3-2 and will look to close out the Rockets in Game 6 on Thursday night at 7 p.m. inside the Toyota Center.