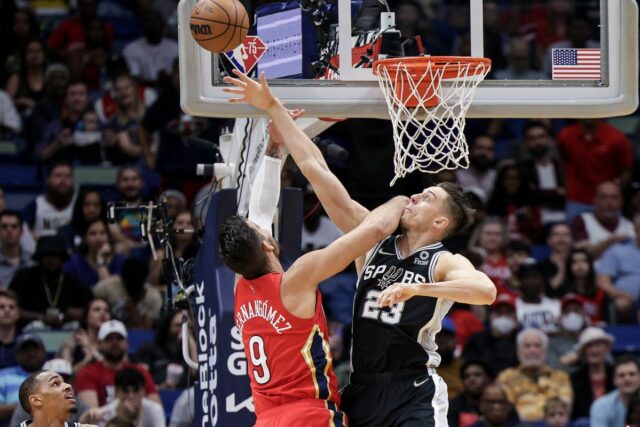 The San Antonio Spurs used a strong final quarter to hold on for a 107-103 victory over the New Orleans Pelicans on Saturday night at the Smoothie King Center.

The win brings San Antonio within one game of the Pelicans for the final play-in spot in the Western Conference. It also avenges a loss to New Orleans last weekend, which saw them trail by more than 30 points.

Keldon Johnson had 21 points while Dejounte Murray had 15 points, 13 assists, and 11 rebounds in the win.

”Our two meetings today, I kind of was mad that we kept watching the film of that last game because they beat us really bad from the tip all the way to the end of the game,” Murray said. ”We all took that personal.”

Jock Landale came off the bench to score 10 points and grab 7 rebounds. John Richardson chipped in 18 points as he continues his solid performance on both ends of the floor.

”We kind of all understood what this game meant to our record and the chase with those guys,” Landale said. ”There was a different level of intensity in the locker room and walking out on the court. … It was just good to see it all come together down the stretch.”

Of the remaining schedule, San Antonio has two matchups with the Portland Trail Blazers and one with the Houston Rockets.

The San Antonio Spurs are now 30-44 on the season and will return to the court on Monday night to face the Houston Rockets at 7:30 p.m.